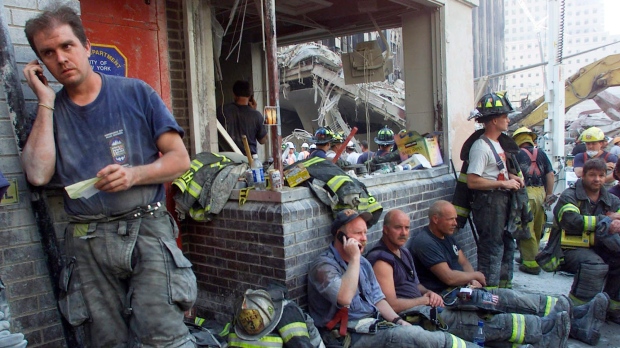 TORONTO — Twenty years after the Sept. 11 terrorist attacks, a new study has found that World Trade Center firefighters were 13 per cent more likely to develop cancer than other firefighters.

Two studies led by researchers from New York were published in the journal Occupational & Environmental Medicine on Friday. In one study, researchers looked at cases of cancer in 10,786 New York City firefighters who worked at the World Trade Center between 2001 and 2016 and compared the data against 8,813 firefighters across the U.S. who were not involved.

The researchers found that 915 cancers were diagnosed in 841 World Trade Center firefighters. In the other group, there were 1,002 cases of cancers in 909 firefighters.

The researchers also accounted for “surveillance bias.” Sept. 11 first responders had been entitled to free cancer screenings, which meant that more cases of cancer could have been picked up due to better health monitoring.

Firefighters are regularly subjected to cancer-causing environments as a part of their job. Prior to this study, it was unclear how much of an additional cancer risk that the environment at the World Trade Center posed.

To date, the U.S. has spent US$11.7 billion on care and compensation for those exposed to the dust — about US$4.6 billion more than it gave to the families of people killed or injured on Sept. 11, 2001. More than 40,000 people have received payments from a government fund for people with illnesses potentially linked to the attacks.

For prostate cancer, the risk for World Trade Center firefighters was 39 per cent higher. These firefighters were also found to be more than twice as likely to develop thyroid cancer.

Another study looked at the risk of prostate cancer among firefighters, paramedics, police, construction workers and volunteers who were involved in the rescue and cleanup at the World Trade Center.

Between 2002 to 2015, the researchers tracked the health of 54,394 men who had been first responders. They found that the first responders were 24 per cent more likely to develop prostate cancer compared to men in New York state who were not part of the rescue and cleanup efforts.

“We also believe that this work will be of interest in the broader context of disaster management, particularly when analyzing time to cancer diagnosis among responders who attended signal events with similar exposures such as the Deepwater Horizon Oil explosion,” the authors wrote.

The researchers involved in both studies note that their studies were observational studies and can’t establish the cause of the cancers. However, authors of both studies say that their findings present a clear relationship between cancer risk and exposure to the World Trade Center.