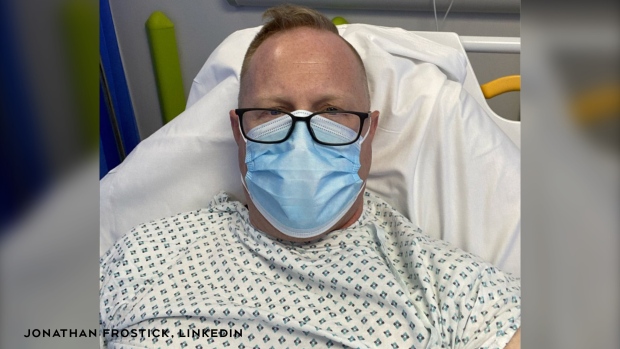 TORONTO — Jonathan Frostick has spent a lot of time rethinking his outlook on work and just how misplaced some of his priorities were.

Last Sunday afternoon, he was at his desk prepping for what would’ve been a busy workweek as a program director at an investment bank in the U.K.

But suddenly, he couldn’t breathe. He was having a heart attack.

As his chest tightened, his ears popped and pain surged through his left arm he was only thinking about work.

“I needed to meet with my manager tomorrow, this isn’t convenient,” Frostick wrote in a post on the networking site LinkedIn, as he laid in a hospital bed. But after his near-death experience, he’s pledging some big changes.

“I’m not spending all day on Zoom anymore. I’m really not going to be putting up with any s#%t at work ever again – life literally is too short.” These were just some of the vows the HSBC employee made and they’ve since led to a groundswell of support from people online.

The epiphany, which Frostick detailed in post last week, has been liked more than 285,600 times as of Sunday and garnered nearly 15,000 comments from all over the world, with many offering their support.

The post resonated at a time when many are facing increased levels of exhaustion, stress, mental issues and insomnia due to the pandemic. And it also comes as countless workers are re-thinking their occupations and just how much time they’re spending on work.

Scores of people commented that they too were heart attack or stroke survivors, with one person saying they were 45 and led to their own “drastic change in behaviour.” Many praised Frostick for his candidness and wished him a speedy recovery.

In what could be described as chutzpah, he even tagged his own employer in his now-viral post. And last week, HSBC spokeswoman Heidi Ashley told BNN Bloomberg “we all wish Jonathan a full and speedy recovery” before acknowledging the post’s impact.

“The response to this topic shows how much this is on people’s minds and we are encouraging everyone to make their health and well-being a top priority.”

While recovering, Frostick also told the outlet that the pandemic and working from home had blurred the line between his private and work life.

“Whereas before I would finish sensibly anywhere between five and half six, I’d be finding myself there on a Friday at eight o’clock at night exhausted, thinking I need to prep up something for Monday and I haven’t got time, and I started then to actually work weekends,” Frostick said in a phone interview to BNN Bloomberg.

“That’s my responsibility. I think that was probably for me where it was those blurring of boundaries,” said Frostick, who also blamed himself for the neglect of his health which led to the health scare.

But he hopes and expects his employer won’t retaliate or have his post reflect poorly on them. “If an organization didn’t want to employ me because I’d actually taken a moment to reflect, and capture this, then that’s probably not the right place for me to be working.”

In his post, Frostick, who has three young children, said he wants to ensure every day counts for something and pledged to “spend more time with my family.” He also told BNN Bloomberg that he hopes his example continues to serve as a wake-up call to others.

“I owe a responsibility to myself and other people,” he said. “This happened to me, this could happen to you. You need to change that.”