You Are Here Home Health News As schools prepare to lift mask mandate, physician says IWK ‘bursting at the seams’ 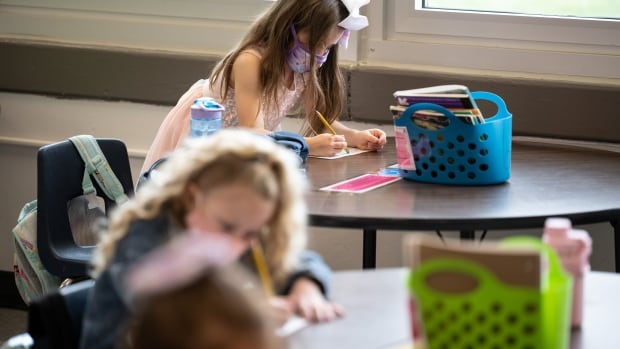 The chief of pediatrics at Atlantic Canada’s largest children’s hospital warned Thursday that his facility is already stretched to its limits as the Nova Scotia government announced masks would no longer be required inside schools beginning next week.

Dr. Andrew Lynk of the IWK Health Centre in Halifax said pediatricians across the province had hoped masking in schools would remain in place until the end of the school year on June 30 to prevent a rise in the number of children coming to hospital with COVID-19 and other respiratory illnesses.

“Our emergency department here at the IWK and our wards, we are just bursting at the seams right now,” Lynk said.

“It’s stressful for parents who come to the emergency department and can’t have their children seen because they’re waiting hours and hours and hours.”

A news release from the provincial government said the mask mandate would end May 24, the first day back to school after the upcoming long weekend. Nova Scotia is the last province to lift the mandate, the release noted.

Education Minister Becky Druhan acknowledged in the release that mask-wearing helped schools mitigate the impact of the most recent wave of COVID-19, but with warmer spring weather allowing classes to spend more time outdoors, in addition to improving epidemiology and school attendance rates, she said it’s time to reconsider the mandate.

“This decision is in line with Public Health, current recommendations around masking, which is that masking is optional,” Druhan said following a virtual cabinet meeting Thursday. “But it’s highly recommended.”

Lynk, who is also the chief and chair of the pediatrics department at Dalhousie University, said it is a stressful time for health-care workers, a number of whom are off sick or have been exposed to COVID-19.

While the IWK has “very few” in-patients related to COVID-19, Lynk said the hospital’s emergency department and wards are dealing with an “unusually high volume” of people. Some of those numbers can be attributed to common viruses, he said.

“Our concern is that with masks off we may see a further increase in numbers of patients coming to ED [emergency department] with COVID and other respiratory illnesses like the flu,” Lynk told CBC News in an email.

“There is no one clear reason for the unusually high and challenging numbers. Influenza may also be just around the corner. Time will tell.”

The physician said he’d like to see more kids vaccinated with two shots. Two per cent of children who get COVID-19 can have prolonged symptoms for more than eight weeks and a few end up in hospital with serious illness, he said.

“Our recommendation is that we would strongly recommend that all students and staff continue to wear masks until the end of the school term,” said Lynk. “And this will help protect not only the students, but their fellow students, their teachers, their families, and also the children’s health-care system. “

Paul Wozney, president of the Nova Scotia Teachers Union, said masking in schools remains a hot button topic for many Nova Scotians and there are significant differences of opinion.

Masking in schools has been extended twice, he said, and the union has raised concerns about the staffing pressures posed by the Omicron variant dating back to November 2021.

Wozney said the Education Department never asked the union for its input when arriving at the decision to end mandatory masking.

“Are we going to see a rise from the already high rates of COVID for students and staff that will exacerbate a successful end to the school year?” he asked.

Moving from mandatory to optional masking could bring conflict to the classrooms, said Wozney, who urged people not to take out their frustrations and disagreements about masking on school staff.

On Thursday, Nova Scotia reported 2,513 new lab-confirmed cases of COVID-19, 59 hospitalizations and 24 deaths during the seven-day period ending May 16. The IWK is not included in those hospitalization numbers.

The province said in a news release that the number of new cases and new hospital admissions continue to decline since the peak of the sixth wave last month.

With the mask mandate being removed in schools, public health restrictions remain in place only at correctional facilities, hospitals and long-term care homes.