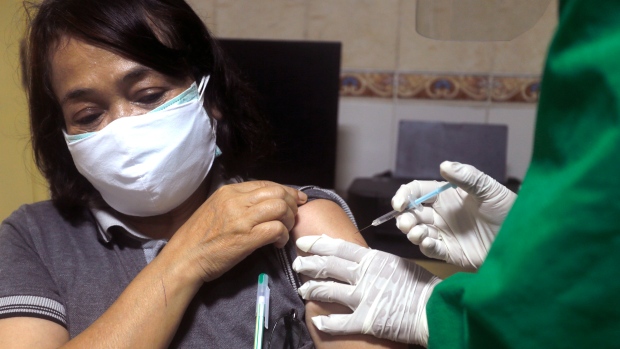 Political leaders are promising that mass vaccination campaigns will see life return to normal, as a more contagious variant of the coronavirus spreads across dozens of countries, adding urgency to the race to end the pandemic.

But vaccination efforts are rolling out slower than promised, raising doubts about an imminent way out of the crisis.

In nations where vaccines have been authorized, criticism is mounting over shortages and delays to getting shots into people’s arms. And solutions devised to stretch supplies — from administering half doses to spreading out the time between two doses — have raised concerns from some experts.

Some governments are pointing the finger at manufacturers for bottlenecks, while vaccine developers say it’s an issue of supply. Others cite complications with distribution plans and a lack of trained staff to administer shots. But most public health experts say the slow pace is the inevitable consequence of creating a new vaccine rollout in real time.

Just weeks after the United Kingdom became the world’s first nation to begin vaccinating its citizens with a fully vetted and authorized Covid-19 shot, its government is facing questions over how many doses are available.

The English city of Birmingham reported it was running out of the Pfizer/BioNTech vaccine last week and doctors are demanding to know where deliveries are.

A report from Britain’s Scientific Advisory Group for Emergencies (SAGE), of which McKee is a member, urged the U.K. government to be transparent on supplies, noting evidence that “some of those involved in implementing the vaccine strategy lack confidence in its organisation.” Asked by CNN how many doses had been delivered, U.K. government officials said they were not able to provide detail about the size of supplies and future deliveries for security reasons.

Some 2 million people have received at least one dose in the U.K. since the campaign started on December 8, but Prime Minister Boris Johnson has promised to ramp up vaccinations to 2 million per week. The U.K. trails Israel, the United Arab Emirates, Bahrain, the United States and Denmark in the rate of doses administered per 100 people, according to a global tracking website affiliated with Oxford University.

McKee said European governments also must be clear about whether delays are down to a shortage of vaccine or an infrastructure issue, saying that it was “simply unbelievable” that countries like France seemed to be floundering. “Many people are looking with incredulity at the failure of a number of European countries to have robust plans in place,” he added.

France has been under fire for its sluggish pace since the campaign started on December 27. Only 516 people were vaccinated in the first week, according to data from the French health authority on January 1. French Health Minister Olivier Veran told reporters Saturday he expected 100,000 to be vaccinated by the end of the weekend. In his New Year’s Eve address, French President Emmanuel Macron said he would not tolerate any “unjustified slowness” in the country’s vaccination campaign, even as health officials argue the rollout is deliberately cautious to help convince the country’s sizable population of vaccine skeptics to get it.

Germany, which started its campaign on the same date as France, has administered over 500,000 shots (less than half of the doses delivered), but is still facing criticisms. Amid calls for the country to take control over purchases from European Union authorities, Health Minister Jens Spahn said there will be “enough vaccine” and urged patience.

The Netherlands only started its campaign on Wednesday, making it the last European country to do so.

Members of the EU vaccine procurement scheme, agreed in June, are reliant on European regulators granting authorization of Covid vaccines — but the EU has taken longer than the U.K., the U.S. and Canada to give the green light. So far, the European Medicines Agency has authorized the BioNTech/Pfizer vaccine and, last week, the Moderna vaccine — with initial orders for 300 million doses of the BioNTech/Pfizer vaccine and 160 million of Moderna.

Asked why it had not secured more vaccine doses last Monday, the European Commission defended its strategy — pointing to the 2 billion doses from six producers already agreed. “We’re all judging this as if this campaign is over; in fact, it is just starting,” EC spokesman Eric Mamer told reporters in Brussels.

But the founder of BioNTech said the EU had been slow to secure doses and warned of possible gaps in supply amid surging demand. “At the moment it doesn’t look good — a hole is appearing because there’s a lack of other approved vaccines and we have to fill the gap with our own vaccine,” Ugur Sahin told news weekly Spiegel. On Friday, European Commission President Ursula von der Leyen said the EU had extended its contract with BioNTech/Pfizer for up to double the agreed doses.

CANADA AND THE U.S.

In Canada, Prime Minister Justin Trudeau has admitted even he is frustrated to see vaccines in freezers and not in people’s arms. As of Sunday, Canada had managed to administer around 315,000 doses since the campaign started on December 14 — about half of the vaccine doses that have so far been delivered.

Federal officials in the U.S., meanwhile, have been struggling to explain why only 6.7 million people had been vaccinated, when three times that number of doses have been distributed; they had promised 20 million people would have been inoculated by the end of 2020. The U.S. also started its rollout on December 14.

“Clearly no excuses. We should have gotten 20 distributed, and 20 into the arms of people,” Dr. Anthony Fauci, director of the National Institute of Allergy and Infectious Diseases, told the Economic Club of Washington. But Fauci said it should “pick up momentum” now the holiday period is over.

U.S. President-elect Joe Biden said Friday he would aim to release nearly every available dose of the coronavirus vaccine when he takes office, a break with the Trump administration’s strategy of holding back half of U.S. vaccine production to ensure second doses are available.

U.S. government officials have so far pinned the blame for initial delays on distribution issues at the state and local level. Without a federal mandate for how to administer the vaccine in the U.S., it’s up to the states to decide who gets the vaccine and when, creating a confusing patchwork of rules that varies greatly across the country.

When asked last week about the discrepancy between the number of vaccines distributed and those administered, Moncef Slaoui, head of Operation Warp Speed, the multi-agency effort to accelerate vaccine development and procurement, said: “We agree that there is a lag. We’ll work with the states. We need specific requests for help, frankly, it’s not for me to decide whether stadiums should be used.”

Some states have acknowledged on-the-ground issues that delayed vaccinations, but many have said for months they need more federal funding to execute complex rollout plans.

Gen. Gustave Perna, in charge of logistics for Operation Warp Speed, took responsibility for initial delays and confusion around the vaccine rollout in a number of states, after a misunderstanding over the approval process led to miscalculations in the doses that would be available in late December.

Each individual batch of vaccine has to undergo independent testing before it can go into the distribution chain, a process that can take up to three weeks. The step, which is essential to assuring quality and safety, has also been referred to as the “red tape” hampering delivery in the U.K.

Another difficulty has been the vaccines’ complicated ultracold storage and transport needs — systems that have had to be set up from scratch. The BioNTech/Pfizer vaccine must be stored at -70 degrees Celsius, or -94 Fahrenheit, far below the capacity of standard freezers. Establishing that infrastructure is easier in developed countries, but by no means simple.

Much can go wrong in the complex chain from production to vialing, distribution and administration to patients but experts say the manufacturing side, which started before vaccines were even authorized, is going smoothly.

“There were going to be natural hiccups in the manufacturing, especially for vaccines that have never been produced at commercial scale. I think it’s gone relatively well in fact. I actually would have expected more problems,” said Robin Robinson, the founding director of the Biomedical Advanced Research and Development Authority (BARDA), a branch of the U.S. Department of Health and Human Services.

“It’ll be messy, for you know, a couple months, it’ll be messy as it rolls out to each new country and region as they go through. But they’re not insolvable [problems]. This isn’t a scientific challenge, like we can’t make the vaccine. This is we have the vaccine, how do we get it to you,” Piervincenzi said.

“In six months time we’re going to be talking about the true bottlenecks rather than the messy stuff that’s going to eventually be cleaned up.”

Grappling with a slower-than-expected pace, officials are rushing to find workarounds and solutions to the massive demand — even lowering required dosages to stretch out supplies.

Britain’s medicines regulator is allowing second doses of coronavirus vaccines to be delayed by several weeks to inoculate more people (a move also being considered in Germany and the U.S.). Separately, the U.K. government suggested that it was “reasonable” to use a different vaccine for the second dose if the same vaccine used for the first one was unavailable, or if a person was high-risk or unlikely to return to the doctor for a shot.

In the U.S., the Food and Drug Administration has said it may be possible to yield six or even seven doses of the BioNTech/Pfizer’s Covid-19 vaccines from the vials instead of the five indicated on the label, because the company overfills them. The FDA will consider giving half-doses of Moderna’s Covid-19 vaccine to people aged 18 to 55.

But as countries try to eke out more doses, health experts say the focus should be on securing “the last mile” of the vaccination process — the steps from when a vaccine is made to when doses are administered to people — and ensuring no one is left out.

An estimated 70 to 90 per cent of the world’s 7.8 billion people would need to receive the vaccine before achieving the so-called “herd immunity” required for people to return to normal life, Fauci has said. Most of the vaccines require two doses per person, that means distributing roughly 10 to 14 billion doses — a logistical challenge the likes of which the world has never seen. Researchers at Duke Global Health Innovation Center estimate the last people in line may not receive vaccines until 2024.

As the West frets over the speed of the vaccine rollout, countries are still scrambling to lock down supplies while others try to ring-fence doses. German Chancellor Angela Merkel has been discussing with Russian President Vladimir Putin the “possible prospects for joint production of vaccines,” according to the Kremlin. And India’s government has restricted vials of AstraZeneca’s Covishield coronavirus vaccine for the domestic market until March or April, raising fears over vaccine nationalism.

COVAX, a partnership between Gavi, the Coalition for Epidemic Preparedness Innovations and the World Health Organization to promote global access to vaccines, is essential to getting doses to developing countries. But hedging by wealthy nations is leaving low- and middle-income nations in the lurch.

Vaccine deliveries under the COVAX facility could start as early as this month, WHO immunization director Kate O’Brien said on Thursday. But the global scheme is reportedly struggling from a lack of funds, supply risks and contractual issues and faces a “very high” risk of failure, according to a leaked internal report obtained by Reuters.

“We need to move from somewhat piecemeal approaches to concerted multinational planning and implementation, with very thoughtful and respectful use of a scarce and incredibly valuable commodity,” David Nabarro, WHO special envoy on Covid-19 and chair of global health at Imperial College London said, emphasizing collaboration over speed.

“The focus on numbers of arms being jabbed is missing the point.”

Controlling adhesions in the abdomen