You Are Here Home Health News B.C. to announce timeline for removing some pandemic restrictions — but not vaccine cards 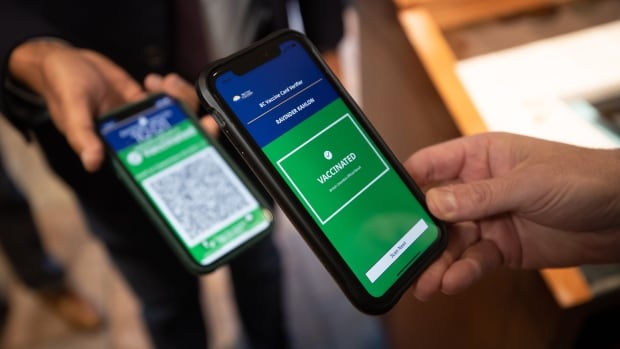 On Tuesday afternoon, British Columbia is expected to join most other provinces in announcing a timeline for removing some COVID-19 restrictions — but lifting the vaccine card isn’t expected to be part of the discussion.

“That’s the approach we’ve taken based on the evidence … and I think it has helped us enormously in the last number of months.”

Provincial Health Officer Dr. Bonnie Henry said in January that some restrictions, including those around capacity limits and events, could be lifted by Family Day on Feb. 21, Dix noted. And he emphasized that B.C.’s vaccine card mandate was extended to June 30 just three weeks ago.

“If that can be taken off sooner than that, of course, based on the evidence, public health can consider that,” he said.

“But that’s not one of the things at issue tomorrow.”

On Monday, Ontario announced it would be removing its vaccine passport system on March 1, although masking requirements would stay in place.

Manitoba will also be lifting its vaccine passport system on March 1, while Saskatchewan and Alberta have already done so.

B.C.’s new strategy will be announced as evidence mounts that transmission of COVID-19 has declined since its peak last month.

The total number of people in hospital is down 23 per cent from its peak at the start of the month, with new hospital admissions also lower. Measurements of the virus in Metro Vancouver wastewater facilities are down 30 to 70 per cent from early January, as well.

“I do think all signs are pointing in a good direction,” said University of British Columbia professor Sally Otto, the Canada research chair in theoretical and experimental evolution and a member of the B.C. COVID-19 Modelling Group.

At the same time, she said it was difficult to say precisely where the province was on its transmission curve, so it’s wise to exercise caution in reopening.

“I hope the province will do a kind of gradually staged reopening,” she said.

“The further down this slope we get [before reopening], the lower the hospitalization rates will be.”

B.C.’s announcement comes after weeks of protests across Canada over vaccine mandates and restrictions remaining in place as the pandemic nears its two-year mark in this country.

Dix declined to directly answer whether he thought other provinces were not “seeking an evidence-based approach” in removing restrictions, but said the province would continue monitoring results in the rest of the country.

“We’re going through the same evidence-based process that has helped us up to this point,” he said.

It will be the third time in the pandemic B.C. announces a reopening strategy, with the subsequent debates likely to play out in similar fashion to previous times.

“There are some people that are very much like ‘open up now’ and others that we are throwing under the bus, our elderly and those with health issues,” said Otto.

“That’s a hard task for governments to balance.”