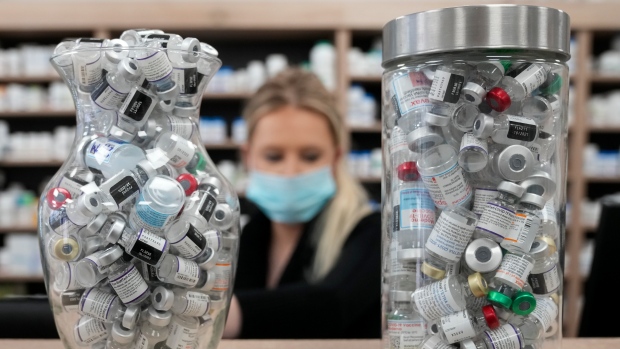 COVID-19 infections are soaring and hospitalizations are rising in many parts of Canada, but with most regions staying the course on relaxed protective measures, providing less data and fewer updates, some medical experts are critical of how the sixth wave of the pandemic is being managed.

With public messaging and inadequate epidemiological data suggesting we are now ‘living with COVID-19’, doctors and other health experts say it is very difficult for the public to make informed personal decisions.

“Getting a real idea of what’s going on across Canada is getting harder and harder … It’s getting to a point that if you want to assess your own risk, it’s going to be impossible to do,” Julie Lajoie, a research associate in medical microbiology at the University of Manitoba with a PhD in virology and immunology, told CTVNews.ca in a phone interview on April 11.

“Right now, many places across Canada are moving to that idea of living with the virus, making it sound like that virus is now in an endemic phase. Which it’s not. We are still really in a pandemic, it’s worldwide.”

For the situation to become endemic, Lajoie says there should no longer be a large influx of hospital patients. The flu does not cause this level of hospitalization, she said, adding that despite people’s eagerness to compare COVID-19 to a cold, the SARS-CoV-2 virus is very different.

Dr. Cecile Tremblay, an infectious diseases specialist at the Centre hospitalier de l’Universite de Montreal (CHUM) and a professor at the University of Montreal, told CTVNews.ca in a phone interview that current numbers do not reflect the scope of the pandemic, which can confuse the public into assuming the virus is not circulating widely.

“Unfortunately, there is no sense of urgency in the population,” Tremblay said, due in part to the public being understandably fed up with measures and wanting a return to normalcy.

Quebec, one of the few provinces that still has a mask mandate in place, currently has the highest number of COVID-19 hospitalizations in Canada, with 1,793 patients admitted for care as of April 11. In January, the province’s public health director Horacio Arruda resigned, admitting to an “erosion” in public trust.

Earlier this month, Canada’s chief public health officer Dr. Theresa Tam said during a federal COVID-19 briefing that case data was “more unstable” making the accuracy of estimates more challenging, even though the core message about a resurgence and its impact remained unchanged. Unlike previous briefings, modelling projections were not given.

Tam stressed that mortality surveillance remained very important, and that Canada needed “to do better.” Developing a good, consistent approach for reporting data at this stage of the pandemic was also crucial, she said.

“I’ll be really disappointed if we … went backwards and let go of the actual gains that we made during this pandemic, and I look forward to working with my colleagues to make sure we’re strengthening that kind of reporting going forward,” she said.

While hospitalization and deaths remain important data points, Lajoie notes they are both lagging indicators and that “some provinces have not been really good on reporting that.” Manitoba, for example, is no longer reporting data on a daily basis and has moved instead to weekly reports, while wastewater data is only available for Winnipeg and not provided weekly.

In Ontario, the province’s chief public health officer, Dr. Kieran Moore, gave his first public news conference in nearly a month on April 11, making a “strong recommendation” to continue wearing a well-fitted, three-layer or medical mask in all public indoor settings. He also expanded the criteria of who could be eligible for PCR testing and antiviral treatments like Paxlovid. But it was not enough for those medical health experts who took to Twitter with their concerns.

“He’s chosen really not to do much and he thinks we’re going to have 600 patients in Ontario’s ICUs. And I’m really confused why he’s accepting that future without doing what’s necessary to protect people,” Dr. Michael Warner, an intensive care physician at Michael Garron Hospital, said in a video posted on Twitter.

Warner noted that, during the fifth wave, Moore had issued a directive to all hospitals to cancel non-emergency surgery when there were 260 COVID-19 patients in the ICU. That figure later peaked at 594 in late January. There were 184 ICU patients as of April 11.

“If we’re on that trajectory, if his data is telling him that, and we don’t change anything, that’s really concerning to me,” Warner said.

“It means that surgeries will likely be cancelled and those patients with non-COVID care needs will be waiting and waiting and getting sicker and sicker and that’s not fair.”

Colin Furness, an epidemiologist with the University of Toronto’s Institute of Health Policy, Management, and Evaluation also criticised Moore for underplaying the virus’ impact, particularly on children, tweeting that, “there is plenty of scientific evidence about the vascular and neuro harm of COVID **even** when the respiratory phase is mild.”

“It’s miles beyond negligent to frame COVID as only a respiratory virus,” he added.

Last week, Furness told CTV News Channel, “the government narrative – which is, ’there isn’t much COVID, there is no pandemic, there is no wave, everything’s fine’ – this is a dreadful, really, really dreadful way to mislead the public into dropping their guard and becoming ill. That’s a huge problem.”

At least one public health unit appears to be taking proactive measures to communicate with its local community. Peterborough Public Health launched its own COVID-19 community risk index two weeks ago, which tells the public what the current risk level for transmission is in the region. It also gives a risk level assessment for the different COVID-19 indicators including case rate, hospitalizations, wastewater surveillance, and test positivity.

Other public health units also continue to recommend masking and vaccinations. Ottawa Public Health unit told CTVNews.ca in an email on Friday that it has informed Moore of the “concerning levels of COVID-19 in Ottawa” and was advised that “at this time they are carefully monitoring the impact on health system capacity to guide their action.”

Many health professionals say they are not looking for a return to lockdowns, but are calling for better policies and messaging. They say provinces should keep the public regularly informed about the epidemiology, continue to remind people about simple, protective actions like mask-wearing, continue to advocate for vaccinations, and stress the effectiveness of booster shots at preventing severe infection. Canada’s booster rate of approximately 50 per cent for the third shot is not enough, they add.

“We need to redefine across the country what ‘fully vaccinated’ means,” Warner said.

“Not for mandates or passports but just because the nomenclature matters. What you call something is important. And this is a three-shot series. Let’s call it like it is. Get your third shot because to be fully vaccinated you need three shots.”

He also said mask mandates should be reinstated in essential places like schools, grocery stores and pharmacies.

“People who are medically frail or immunocompromised have a right to get their medicines, get food, have their kids and grandkids come home from school from a maximally safe environment,” he said.

“I think that’s fair. And I don’t think it’s too much of an incursion on other people. I think it’s easy.”

There is also an economic cost to current policies as well, experts say, from employees having to miss work and care for their sick child or getting sick themselves.

“I do understand the necessity to go back to a more normal life and that it’s probably not necessary to start lockdowns and closing enterprises. But there is a difference between doing that and not doing anything at all,” Tremblay said.

“People have to keep in mind that they still need to keep their masks, to try to keep social distancing, get their third dose or their fourth dose of vaccination. And also if they are symptomatic, to stay home and stop spreading the disease. These messages need to be repeated. Unfortunately, they need to be repeated regularly. And we haven’t seen this enough in the past few weeks.”