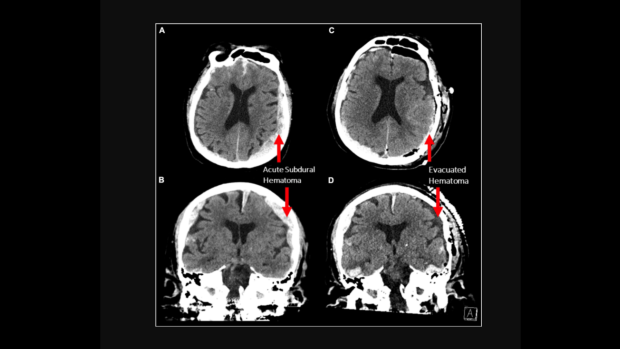 A new study that examined the brain activity of an 87-year-old man who died from heart attack in hospital found unexpected activity in the memory retrieval area of the brain, suggesting that the organ may replay significant life events before we die.

The international team of researchers, which included scientists from Canada, China, the U.S. and Estonia, detailed their findings in a study published Tuesday in the journal Frontiers in Aging Neuroscience.

Brain activity in humans after cardiac arrest and near-death experiences, which the researchers refer to as NDEs, are not well understood, the study says. While brain activity after death has been assumed, no previous study has measured it during the process of dying, researchers said.

The man in the study was brought to hospital after suffering a fall that gave him a “traumatic subdural hematoma” a condition where blood pools between the brain’s surface and the skull.

After the usual course of treatment, including cutting out a portion of his skull (craniotomy) to alleviate the bleeding and pressure, the man died while doctors were carrying out an electroencephalography (EEG) which tracks electrical signals in the brain.

The study analyzed the recordings of the 900 seconds, broken into 30-second blocks before and after the man’s heart stopped beating, and noted a change in the brain waves he experienced, suggesting that the brain continues some activity even after blood stops flowing to it.

Researchers studying the EEG saw the “brain oscillations,” or patterns of rhythmic brain activity, change in the alpha, gamma, delta, theta and beta waves in the moments leading up to and after death, which they posit supports the theory that activity could support the “life flashing before your eyes” trope seen in popular culture.

The findings suggest that an intricate interplay between low- and high-frequency bands of brain waves takes place after gradual cessation of cerebral activity and lasts into the period when cerebral blood flow ceases post cardiac arrest, the study said, adding that similar neural activity has been observed in rodents who experienced heart attacks.

“Given that cross-coupling between alpha and gamma activity is involved in cognitive processes and memory recall in healthy subjects, it is intriguing to speculate that such activity could support a last ‘recall of life’ that may take place in the near-death state. Unlike previous reports, our study is the first to use full EEG placement, which allows a more complete neurophysiological analysis in a larger dimension,” researchers wrote.

However, the researchers cautioned that this was data from only one person and that damage to the brain from the man’s injuries must also be considered, also noting that he was on a significant dose of anti-seizure medication which could also have affected brain activity.

Despite the caveats noted by the researchers, the study says the results have important implications as they help challenge understandings on when life and death end exactly, which can be pertinent to practices like organ donation, and the data obtained by the study is unique as it is ethically not possible to plan for the collection of such data from patients.