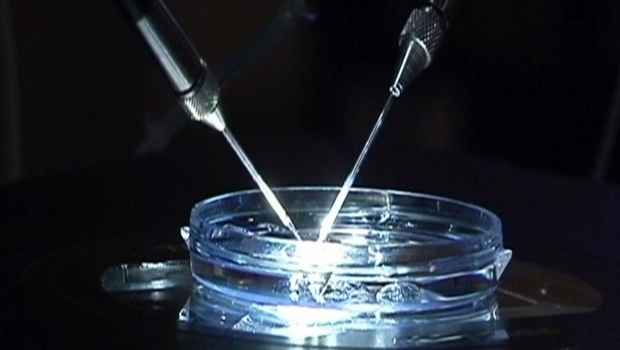 Couples struggling with infertility and their advocates are pushing for a change in Canadian legislation to decriminalize the purchase of human eggs for reproductive purposes.

Shannon and Shawn Tiffin started trying to conceive eight years ago. However, Shannon was told by her doctor early on that she would not be able to get pregnant.

“When he first said to me, ‘Your eggs aren’t viable,’ I’m like, ‘Well I guess we’re done’,” Shannon told CTV National News.

Roughly 16 per cent, or one in six, Canadian couples experience infertility, according to federal data.

The Tiffins tried different drugs and treatments, but none seemed to help.

Then, they learned about a process known as egg donation, in which a fertile woman donates an egg to another woman to help her conceive.

However, donating eggs in an invasive procedure that comes with some risks, so finding a donor can be difficult.

“I think we got up to about 15 people that total we had asked,” Shannon said.

They were willing to pay, but in Canada, buying human eggs is considered a criminal offence.

The issue was recently featured in a documentary called “The Secret Society” in an effort to shine light on the “secretive, complex and criminalized world of assisted reproduction in Canada.”

Documentary filmmaker Rebecca Campbell told CTV National News she had to join private social media groups and chat rooms to find couples who were willing to pay for egg donors, since the process is illegal.

“They are living in secret, and they shouldn’t have to be,” Campbell said.

Decriminalization of paid egg donation has been proposed through bills in the Senate and the House of Commons in recent years, but none of them has passed.

“Some of us were really not at ease with right away going to decriminalization,” Sen. Julie Miville-Dechene said of the failed bills.

Miville-Dechene said a major concern for some is that decriminalization could lead to the exploitation of vulnerable women.

“I feel very strongly that women eggs are not a commodity,” she said. “I do think you run the risk of putting the health of some women at risk.”

However, Shawn Winsor, a bioethicist with the University of Toronto, says putting policies in place would help to regulate such concerns.

Winsor said Canada is far behind many other countries, such as the U.S., Greece, Finland and Russia, which have already legalized and regulated paid egg donation.

With the process proving difficult in Canada, the Tiffins have looked across the border for help, purchasing eggs from a U.S. company.

The Tiffins say they hope laws will change soon so other couples can find donors in Canada and not have to deal with what they have gone through.

“The biggest benefit, I think, would be that it wouldn’t have to be in the shadows,” Shawn said.

However, change to current legislation is something Canadian politicians are approaching cautiously.

The Senate says it is once again “studying” the subject, part of which includes watching Campbell’s documentary.