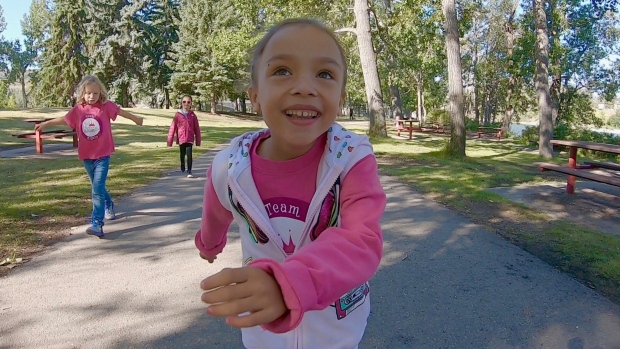 CALGARY — With matching pink shirts, the members of the Princess Warriors team are well on track to reach their 100-kilometre target by Sept. 10, the date the annual Kidney March is celebrated.

The mini-marchers are supporting their classmate and fellow marcher, six-year-old Alysha Somji, who has kidney disease and is on dialysis 16 hours a day.

“But dialysis only gives you eight to 10 per cent kidney function, so we need to get that transplant which we just got a date yesterday,” Robin Somji, Alysha’s mom, told CTV News on Wednesday. “Sept. 23 is transplant date and we’re very excited and she knows that in about 29 sleeps she’s going to get her new kidney.”

Alysha’s kidney disease journey started 15 months ago when her mom noticed something wasn’t right and took her to the Alberta Children’s Hospital.

“So we headed in at two o’clock in the afternoon and at five o’clock we were told that our child had four per cent function between both kidneys,” recounted Somji. “So they admit us to the hospital and within 24 hours she had an emergency surgery to put a peritoneal catheter into her stomach so we could have dialysis done on her as quick as possible.”

Alysha went to her kindergarten class at the Calgary Changemakers School in Springbank whenever she could last year to be around her friends.

Xavier Jagger is one of those classmates and his mom Jacynthe talked to other moms to have their children participate in the 12th annual 2021 Kidney March.

“She’s been incredibly inspiring for us so we’ve been trying to find a way to support her and when we heard about the Kidney March it just made so much sense,” said Jacynthe Jagger. “It was something tangible for the kids to get involved with.”

The Somji family is touched by how the school community has banded together to raise money for kidney disease research.

“They’re just amazing people,” said Somji. “For the kids to have those friends and the parents to support it and guide the children and help them understand the difference they’re making, I just think is truly incredible.”

This is the second consecutive year the three-day Kidney March will be held virtually in response to the ongoing COVID-19 pandemic.

Joyce Van Deurzen, the executive director at The Kidney Foundation of Canada Southern Alberta Branch and Saskatchewan Branch, says $9.5 million has been raised in the 11-year history of the Kidney March.

“It’s about coming together as a community,” explained Van Deurzen. “Doing something powerful and raising a ton of money that can really make a difference in people’s lives by funding research and programs that directly effect people that are living with kidney disease.”

One-in-10 Canadians have kidney disease and they range in age from adolescence to seniors.

The disease offers few warning signs and a person can lose up to 80 per cent of kidney function without any symptoms. Of all Canadians currently awaiting an organ transplant, 77 per cent are waiting for a kidney.

“I mean what could be more inspiring than six year olds who step up,” said Van Deurzen. “What an example, what an inspiration for all of us, it’s just so touching and so motivating for everybody.”

The Princess Warriors have a goal of raising $7,000 for this year’s Kidney March and are close to it.

Learn more about their efforts at Marching for their Princess Warrior.