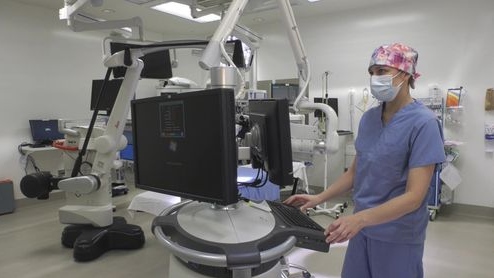 A new innovative surgery at Cambridge Memorial Hospital is providing a new option for breast reconstruction for cancer patients.

The surgery has been done in Ontario before, but doctors performed the first procedure of its kind in Waterloo Region last week to help restore sensation for a patient after a mastectomy.

“This is the only place in the region that we have this option,” said Dr. Kathryn Sawa, a plastic and reconstructive surgeon.

“Nerves regenerate at one millimetre a day, is what we typically say,” Dr. Sawa said. “So, for this patient, we won’t be able to assess whether or not she’s regained sensation for about a year or more.”

The procedure is considered a cancer reconstruction surgery and is covered by OHIP.

Rebecca Matthews, who is from Dorchester, was diagnosed with Stage 3 of an invasive form of breast cancer in February 2019.

“I was devastated, in shock, afraid,” she said. “I was angry. I went through the stages of grief. I was 46 when I was diagnosed. One in eight women will be diagnosed with breast cancer this year.”

About a month later, she had a double mastectomy and reconstructive surgery at University Hospital in London.

Experts say, in the majority of cases, sensation is lost for good after a regular reconstructive surgery on cancer patients.

“You always hope and pray that it will come back, but you know, in our reality, it probably won’t,” Matthews said.

Not everyone is a good candidate for the nerve-repairing surgery. Patients will need to go through the consultation process, but Matthews said she’ll consider it.

“To have some sort of sensation there, it would be nice,” she said.

Doctors at CMH said restoring sensation after a mastectomy can bring back feelings of comfort and confidence for patients who have already been fighting against cancer.