Canada joined several European nations by halting flights from the U.K. on Sunday in an effort to prevent a new, potentially more contagious strain of the coronavirus from spreading to this country.

CBC News obtained a Notice to Airmen (NOTAM) issued by Transport Canada stating that all commercial, private and charter flights transporting passengers from the U.K. will be suspended as of midnight tonight. The restriction doesn’t apply to cargo flights, aircraft landing for safety reasons or flights that land for technical stops where no passengers disembark.

The notice said Transport Minister Marc Garneau “is of the opinion it is necessary for aviation safety and the protection of the public, to prohibit the [operations] of commercial air … from the United Kingdom for the transport of passengers on an inbound [flight] to Canada.”

Data from the flight tracking website Flight Aware show that at least 10 nonstop flights departing from London airports arrived in Toronto, four in Montreal, and two in Vancouver over the past week. Some of those flights continued on to other destinations, including Calgary and Edmonton.

Minister of Public Safety and Emergency Preparedness Bill Blair tweeted that the restrictions “will be initially in place for 72 hours after which time they could be extended or enhanced.”

Enhanced screening measures are in place for passengers and crew on those flights that have already departed the UK and are expected to enter Canada before the closure takes effect. For more information on these measures, please follow this link: <a href=”https://t.co/XTVTSHAd4E”>https://t.co/XTVTSHAd4E</a>

Air Canada said it would temporarily suspend all flights between Canada and London’s Heathrow Airport as of Monday. Two final flights will depart from Toronto and Vancouver and fly to London Sunday evening, the airline said.

“We regret the impact of the government directive to immediately suspend flights on our customers’ travel plans in the middle of the holiday season and will continue to monitor this dynamic situation closely and adjust the schedule as appropriate,” the statement said.

The decision to restrict U.K. flights followed an afternoon meeting of the Incident Response Group (IRG), a group of cabinet members and senior government officials.

No cases of new strain identified yet in Canada

Hajdu and Dr. Theresa Tam, Canada’s chief public health officer, updated the group about the genetic variant of the virus that causes COVID-19, “including its reportedly higher transmissibility,” according to a readout of the call from the prime minister’s office. Dr. Tam and Hajdu updated the group on the variant’s properties, including its reportedly higher transmissibility.

Several ministers told the group the additional measures would give the government time “to gather further evidence and conduct additional research on the new variant to keep Canadians safe,” the statement said.

PHAC said no cases of the new strain have been identified in Canada, although public health officials and researchers are working to determine whether the strain is already present.

“Genetic variation of viruses such as the one that causes COVID-19 is to be expected and have been previously observed in parts of the world this year,” PHAC said in a statement. “While early data suggest that the United Kingdom variant may be more transmissible, to date there is no evidence that the mutations have any impact on symptom severity, antibody response, or vaccine efficacy.”

The IRG meeting was convened as several European nations restricted travel from the U.K. after Prime Minister Boris Johnson revealed on Saturday that a new variant of the coronavirus that is more than 70 per cent more transmissible than existing strains is driving a rapid rise in the number of people testing positive for COVID-19 in the U.K.

Ireland, Germany, France, the Netherlands, Belgium, Austria and Italy all blocked flights from the U.K. — some for 48 hours and others for longer. Germany called a special crisis meeting of EU countries scheduled for Monday to co-ordinate the response to the virus news among the bloc’s 27 member states. Champagne told the IRG about the measures other countries took in response to the new variant, according to the statement. 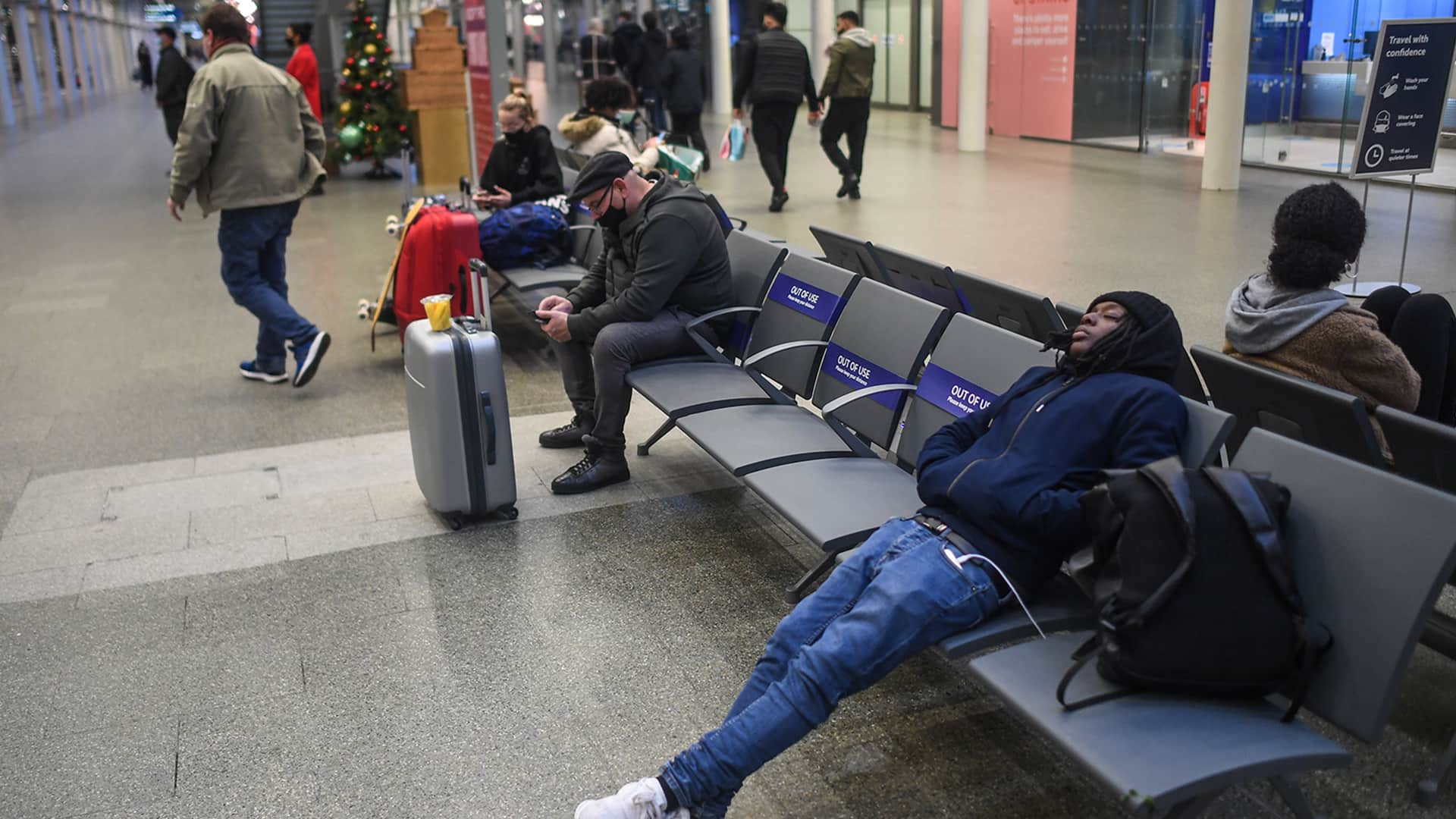 Canada joined several countries in the European Union in suspending air and train travel from the U.K., hoping to prevent the new strain of the coronavirus currently spreading in southern England from taking hold elsewhere. 5:08

Travellers who are granted entry to Canada are required to quarantine or self-isolate for 14 days upon entering Canada.

“These new measures complement the robust travel restrictions and border measures that have been in place since March 2020, notably mandatory quarantine measures that require travellers to quarantine or isolate for 14 days immediately upon entry to Canada,” the prime minister’s office added in a statement.

Prior to Trudeau gathering with his cabinet ministers, Bloc Quebecois Leader Yves-François Blanchet called on the government to follow Europe’s lead and impose a travel ban on the U.K. to prevent the strain from reaching Canada.

“It will be several months before the pandemic is contained, especially with the number of [vaccine] doses available remains far too small,” Blanchet said in a statement released in French.

“If a variant of COVID-19 were to spread with increased speed among vulnerable people, the effects could be devastating on people’s health as well as on the health-care system and staff already under tremendous pressure.”

NDP Leader Jagmeet Singh echoed that call in a Twitter post, saying that while more information is needed, flights from the U.K. should be suspended in the meantime.

“With vaccines still very rare, if this new strain gets loose here in vulnerable populations, it will be a disaster,” his post read.

Conservative health critic Michelle Rempel Garner called on the Liberal government to provide more information about the new genetic variant and to explain any decision to restrict flights.

“Canadians are looking for accurate information about the new variant of COVID-19 that has been identified in the United Kingdom,” Garner said in an emailed statement.

“The ties between our two countries are extremely close, with many Canadians’ families overseas … if the Trudeau government is considering a similar travel ban, they need to clearly communicate this to Canadians and their rationale for doing so as soon as possible.”