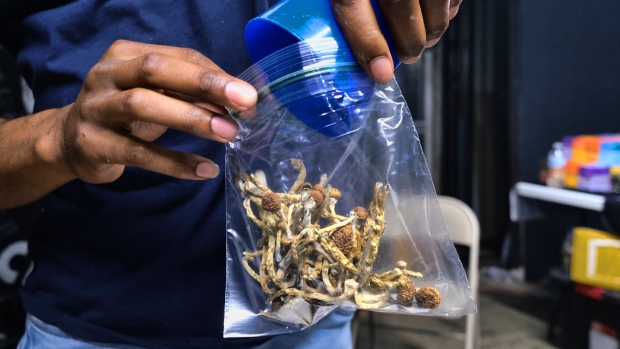 About 80 health-care professionals from across the country are challenging Health Canada’s decision to reject their applications to use restricted psychedelic drugs as part of training in psilocybin-assisted psychotherapy.

The professionals — including doctors, psychologists, clinical counsellors, social workers and nurses — sent affidavits to Health Canada on Monday after the federal agency issued a letter of intent to reject their requests.

They sought exemptions last year to use controlled substances in their practices under a section of the Canadian Drugs and Substances Act that allows for exceptions.

“We need emergency access. After a year of waiting, they’re being told no, and that’s unacceptable, because so many of them have patients, some of (whom) have died … waiting for support. They could have been helped.”

Hawkswell said hundreds of Canadians inquire about it every year because they are in palliative care, have become treatment resistant or are struggling with end-of-life distress. Others ask for the substances to treat their anxiety, depression, post-traumatic stress disorder or other illnesses.

“There are only three practitioners on TheraPsil’s roster … that are authorized to act as primary therapists and have undergone experiential training,” says the affidavit filed by TheraPsil’s lawyer Nicholas Pope.

“Trained practitioners are clustered in only a few areas of Canada making them practically inaccessible to patients outside the local vicinity.”

In the document, Dr. Valorie Masuda of Victoria, B.C., who has received experimental training through a clinical trial, says “she has no additional capacity to take on any more patients, and she does not know of anyone else to whom she could refer a patient for assessment, support and treatment.”

Hawkswell said many Canadians are going underground to receive the therapy “and that’s going to continue if we don’t train therapists.”

Hawkswell and Yassie Pirani, a Vancouver-based registered clinical counsellor, say it is necessary for experts who support patients during their psychotherapy to experience the therapy itself.

“The experiential component is absolutely essential,” said Pirani, who is also one of the dozens noted in the affidavits submitted to Health Canada.

“It’s believed that by experiencing this non-ordinary state of consciousness first-hand, therapists … are going to be better able to intervene and, more importantly, know when not to intervene, and help patients integrate their psilocybin experience.”

Pirani, who helps treat anxiety and depression, said the efficacy of psilocybin is “really exciting.”

There are medications doctors currently prescribe, for example, that can lead to irreversible sexual dysfunction, but “psilocybin has a lot less risk and this is known in the research.”

Health Canada recently amended its laws to allow physicians to request restricted psychedelic drugs for patients as part of their psychotherapy.

TheraPsil’s lawyer, Pope, said the requests take time and require “many hours from multiple health-care practitioners who are knowledgeable and properly trained to assess, support, and treat a patient.” But there are not enough to meet the demand.

Health Canada suggests in its letter that professionals requesting exemptions for training should enrol in a clinical trial already approved in which they could access psilocybin, or Therapsil can create its own clinical trial.

Health-care practitioners already knew about the clinical trial before their request for exemption, Hawskwell said.

Health Canada has granted about 80 exemptions for varying reasons, including for people with cancer, PTSD and chronic pain.

Hawkswell and lawyer Pope said they are ready to make a charter application if Health Canada does not retract its rejection.

“You can’t have patients’ life, liberty and security infringed upon, and there’s little to no evidence the exemption would cause harm to public safety,” Pope said.

This report by The Canadian Press was first published Feb. 28, 2022.

A previous version said Health Canada has granted an exemption for a patient with an opioid disorder.