You Are Here Home Health News Chinese vaccine arrives in Hungary, a first in the EU 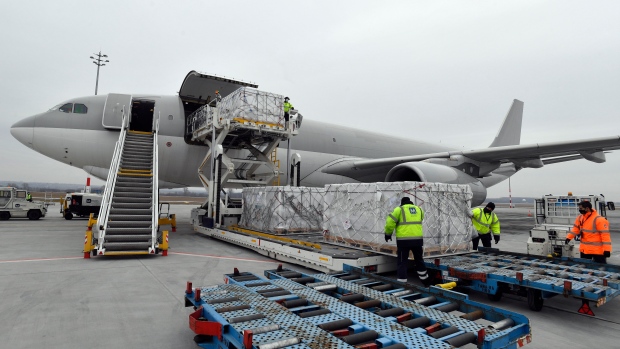 BUDAPEST, HUNGARY — A shipment of COVID-19 vaccines produced in China arrived in Hungary on Tuesday, making it the first of the European Union’s 27 nations to receive a Chinese vaccine.

A jet carrying 550,000 vaccine doses developed by the Chinese state-owned company Sinopharm landed at Budapest’s international airport after flying in from Beijing. The shipment is enough to treat 275,000 people with the two-dose jab, Dr. Agnes Galgoczy of the National Public Health Center told a press conference.

“With this vaccine, five different types are now available in Hungary so that we may get as many people vaccinated as quickly as possible,” Galgoczy said, adding that vaccine shots won’t begin until the shipment is evaluated by the National Public Health Center.

Hungarian health authorities were the first in the EU to approve the Sinopharm jab for emergency use on Jan. 29. That came after a government decree streamlined Hungary’s vaccine approval process by allowing any vaccine administered to at least 1 million people worldwide to be used without undergoing review by the country’s medicines regulator.

The country expects to receive 5 million total doses of the Sinopharm vaccine over the next four months, enough to treat 2.5 million people in the country of nearly 10 million.

“If vaccines aren’t coming from Brussels, we must obtain them from elsewhere … One cannot allow Hungarians to die simply because Brussels is too slow in procuring vaccines,” Orban said last month.

On Friday, Orban claimed these additional vaccines from Russia and China will enable Hungary to vaccinate millions more people by the end of May than other European countries with similar populations.

“As things stand now, (we can vaccinate) 6.8 million people by the end of May or beginning of June,” Orban said in a radio interview. “I think this is huge.”

Orban earlier said he would personally choose to be inoculated with the Sinopharm vaccine since he trusts it the most.

“I think the Chinese have known this virus for the longest and they probably know it the best,” he said last month.

The Sinopharm vaccine, which the developer says is nearly 80% effective, is already in use in Hungary’s non-EU neighbour Serbia, where around half a million ethnic Hungarians have already received the jab. The company has not yet released data on the results of the vaccine’s Stage 3 trials.

The new vaccines shipment represents around 40% of all COVID-19 vaccine doses that Hungary has received so far, and makes Sinopharm nearly equally prevalent in Hungary as the Pfizer-BioNtech vaccine.

But recent polling shows that some Hungarians are reluctant to receive the Sinopharm jab. A survey of 1,000 people in the capital of Budapest by pollster Median and the 21 Research Center showed that among those willing to receive a vaccine, only 27% would take a Chinese vaccine, compared to 43% a Russian vaccine and 84% a jab developed in Western countries. The poll had a margin of error of plus or minus 3%.