You Are Here Home Health News COVID-19 transmission to babies before, during, and after birth rare, study finds 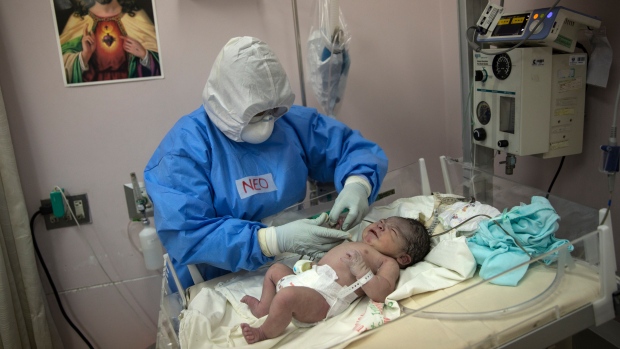 COVID-19 transmission to a newborn from the birthing parent is fewer than two per cent, according to a new systematic review study that analyzed data from more than 470 studies.

The study, led by researchers from the University of Birmingham, found that among more than 14,200 babies who were born to a parent infected with COVID-19, 1.8 per cent tested positive for SARS-CoV-2 using a PCR test. Data varied from region to region, however, with North American studies suggesting a 0.1 per cent positivity rate and studies from Latin America and the Caribbean suggesting a positivity rate of 3.2 per cent to 8.7 per cent.

No connection was found between nursing and infection among newborns, despite detection of the virus in a handful of breast milk samples, researchers said.

The paper, published this month in The BMJ, examined 206 cohort studies and 266 case series and case reports from major databases, preprint servers and other repositories from around the world, between Dec. 1, 2019 and Aug. 3, 2021. Nearly 29,000 pregnant individuals and more than 18,200 babies were included in these studies. The studies were all based on the original virus, and not on any of the variants of concern.

“Parents and health-care professionals can be reassured that only a very small proportion of babies born to mothers with SARS-CoV-2 test positive. This implies that the risks of infection to such babies are rare,” Shakila Thangaratinam, a professor of maternal and perinatal health at the University of Birmingham who led the study, said in a statement.

“Mothers should also be reassured about the low risk of viral transmission through vaginal birth, skin-to-skin contact and breastfeeding — all of which should be encouraged.”

Where data was available on the timing of the exposure, as well as the type and timing of the tests, 14 infants had confirmed mother-to-child transmission: seven occurred in utero, two occurred sometime between labour and delivery, and five shortly after birth. Among 800 babies who tested positive for the virus and where their survival outcomes were known, 20 were stillbirths, 23 were neonatal deaths, and eight were early pregnancy losses, researchers found.

Researchers said they found “a significant association” between the positive status of the babies and maternal factors such as a severe COVID-19 infection, maternal admission to the intensive care unit, maternal death, and postnatal diagnosis of SARS-CoV-2 infection in the parent who gave birth.

The study fills an important knowledge gap on the risks to babies when the birthing parent is infected with the SARS-CoV-2 virus, says one public health expert.

“Their study provides vital information on mother-to-child transmission of SARS-CoV-2, including rates of positivity among babies born to mothers with the virus, the likely timing of mother-to-child transmission, clinical outcomes among babies with the virus, and whether maternal characteristics or factors associated with labour, delivery, or breastfeeding increase the risk of babies becoming infected,” wrote Catherine McLean Pirkle, an associate professor with the University of Hawai’i at Manoa’s Office of Public Health Studies, in an editorial for The BMJ.

“The results suggest that when proper preventive measures are taken during intrapartum and early postpartum periods, such as consistent and appropriate use of personal protective equipment, infection of newborn babies is unlikely.”

Still, Pirkle noted that despite hundreds of millions of infections around the world and a review of hundreds of studies, data to quantify positivity rates was only available for less than 15,000 babies exposed to the virus.

Researchers noted that their findings were limited by variations between studies, such as how “severe” and “mild” infections were defined, the types, timing, and accuracy of tests used on the parent and child, and certain details that were not included in some of the studies analyzed. Clinical outcomes of the babies were also inconsistently reported, the authors noted, making it difficult to determine whether some deaths and stillbirths were related to COVID-19 or other factors.

This is the latest research that digs into the virus impact on newborns. One study published in January found that those who were pregnant were more likely to experience severe outcomes of COVID-19 and at greater risk of losing the child if they were unvaccinated, while another study published in November found that COVID-19 could cause changes to the immune system, making those who are pregnant more susceptible to inflammation and other pregnancy-related complications. Earlier international research also found that maternal antibodies could be passed through the placenta, umbilical cord, and in breast milk, offering newborns early protection.

This latest research is a living systematic review and will be updated for up to two years after publication to reflect new research, the authors said.