You Are Here Home Health News COVID-19 vaccines don’t cause shingles, but may lead to flare-ups, experts say 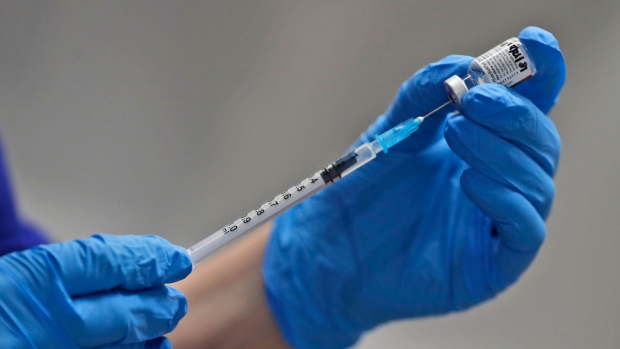 TORONTO — While some are suggesting on social media that shingles may be a side effect of the COVID-19 vaccine, experts say there is no evidence to suggest that the vaccines cause shingles.

However, studies suggest COVID-19 infection or vaccination against the disease may “reactivate” the virus if a person already has had shingles or chickenpox.

Dr. Gerald Evans, chair of Queen’s University’s infectious diseases division in Kingston, Ont., told CTVNews.ca on Tuesday that he is not surprised some people reported a shingles flare-up after being vaccinated.

Shingles, or herpes zoster, is a viral infection caused by the chickenpox virus (varicella zoster). Shingles often shows up as a painful skin rash with blisters, usually on part of one side of the body.

Evans explained that people get shingles when the virus that causes chickenpox has a resurgence in the body, typically when a person’s immune system is weakened because of another health problem.

“Shingles reactivates when there may be some mild derangement caused by stress and other things like immune-suppressing medications and intercurrent illnesses, which allow the virus to then begin reactivating and producing the shingles,” Evans explained.

He added that even the stress of getting a vaccine could act as a factor in causing a shingles flare-up.

Evans said the varicella zoster virus doesn’t leave the body, even after a person has recovered from chickenpox, causing shingles to occur “sporadically in people all the time.”

“It’s almost certainly coincidence because shingles is becoming more and more common in the general population, just simply because we’re not being exposed to the chickenpox virus anymore which used to kind of immunize us against shingles for many, many years until we got to be old,” Evans said.

Dr. William Schaffner, an infectious disease expert at Vanderbilt University and a spokesperson for the Infectious Diseases Society of America, previously told The Associated Press that reports of shingles after being vaccinated are a coincidence.

“We have been emphasizing the vaccination of older adults. That’s the very population in which shingles is the most common, and so you would expect some cases of shingles to occur after vaccination… because it’s going to occur anyway,” Schaffner said.

A small study conducted in Israel found that six participants out of 491 experienced mild shingles for the first time after getting their first dose of the Pfizer-BioNTech COVID-19 vaccine.

The study, which was published in April 2021 in the journal Rheumatology, reported that all six individuals had pre-existing conditions, including rheumatoid arthritis, which lowered their natural immune response.

The six cases were between the ages of 36 and 61, and they all made a complete recovery.

In the report, researchers noted that the study wasn’t designed to determine if the COVID-19 vaccine was triggering shingles, as they said their numbers were too small to draw any conclusions.

However, the researchers said further monitoring is warranted.

Data gathered in Brazil also showed an increase of approximately 10 cases of shingles for every one million residents during the pandemic.

However, a cross-sectional study published in October 2020 by the University of California found “no statistical evidence” to support claims of a link between shingles and COVID-19.

Evans said it is possible COVID-19 infection may spark a reactivation of shingles, however, he cautioned that there is no definitive, scientific data to prove that.

“It’s not that the vaccine caused the shingles, the vaccine was just one of what could have been many different triggers to have produced an episode of shingles,” Evans said.