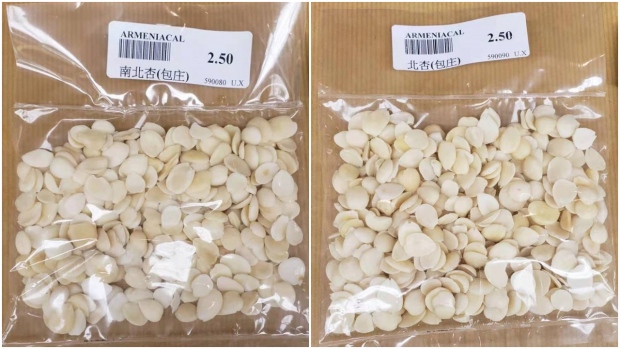 VANCOUVER — A recently updated recall warns that consumption of a product sold in British Columbia could cause cyanide poisoning.

The Canadian Food Inspection Agency said in an update Thursday that certain apricot kernels are being recalled due to presence of the natural toxin amygdalin.

Amygdalin is a naturally occurring chemical compound that is found in plants and seeds, including those of apricots.

When amygdalin is ingested, it can release cyanide in the body. Health Canada says humans can tolerate and eliminate small amounts of cyanide, but large amounts can be fatal.

Because apricot kernels are a known source of amygdalin, Health Canada established a regulatory maximum level for total extractable cyanide back in 2019. The new rules came into effect on Jan. 25, 2020, so products purchased before the date should not be consumed by children, and adults are advised not to have more than three a day, ground up with other food.

The products included in the latest recall contain excessive amygdalin, CFIA says. They should be thrown out or returned to the store where they were purchased.

The recall was triggered by CFIA testing, and further products may be added.

Earlier this month, several other products were identified in an apricot kernel recall, some of which are sold across Canada.

There have been no reports of illnesses associated with the recalls.