Even more Kinder chocolate products have been recalled in Canada over fears of salmonella contamination.

Health Canada announced Monday more products are being pulled from shelves due to possible salmonella contamination. Over 20 products are now on the recall list including Kinder Easter mini eggs and advent calendars. The products have been sold across Canada, according to the national health agency.

Candy maker Ferrero Canada Ltd. issued the first recall last week but it has since been expanded. 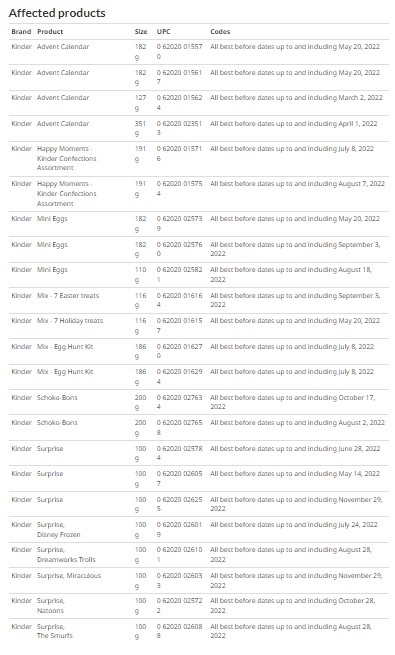 “There have been no reported illnesses associated with the consumption of these products in Canada,” Health Canada said in the recall notice.

Ferrero recalled several batches of Kinder Surprise chocolate eggs and other products from shelves in Spain, Britain, Ireland and United States. Belgian health authorities ordered the Italian candy maker on Friday to suspend production at its plant in Belgium, after an investigation into dozens of cases of salmonella linked to the company’s Kinder chocolates.

Health Canada is warning if you think you became sick from consuming a recalled product, call your doctor. If you have purchased the recalled products, toss them in the trash or return them to the location where they were purchased.

Some of the short-term symptoms of salmonella include fever, headache, vomiting, nausea, abdominal cramps and diarrhea. Salmonella can also cause long-term issues for young children, pregnant people, elderly people and those with weakened immune systems.