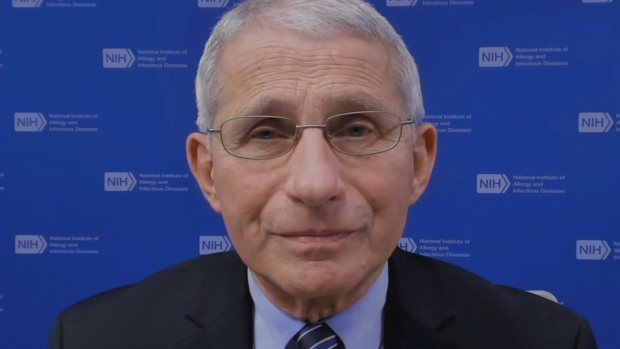 TORONTO — One of the toughest battles for health officials in the war against COVID-19 has been fighting disinformation and opposition to public safety measures. For Dr. Anthony Fauci, director of the U.S. National Institute of Allergy and Infectious Diseases, the source of that opposition has sometimes been standing beside him at press conferences in a thick red tie.

U.S. President Donald Trump has publicly floated the idea that injecting a disinfectant somehow cures COVID-19 (it doesn’t), defied a state order to wear a mask during a visit to Michigan in May and openly encouraged protesters upset with their state’s stay-at-home orders. A Cornell University study published in October cited Trump as the biggest driver of COVID-19 disinformation throughout the pandemic.

“I’m not going to get into some of the politics of it but I doubt that the divisiveness is going to change overnight. That’s something we’re going to have to work on to get everyone understanding and pulling together.”

Fauci became one of the most recognizable public health figures throughout the pandemic. A seasoned immunologist who’s been in the field since 1984, Fauci was often responsible for breaking down complicated science for the general public and advising the Trump administration on how to handle the worsening outbreak.

Navigating the pandemic is challenging enough on its own, but the divisive rhetoric around COVID-19 makes things even tougher, Fauci said.

“We have certain areas of the country where even now, despite the numbers that are staring at us right in the face, there are people that don’t think this is serious. They think it’s fake news, they think it’s a hoax, they think it’s just made up an exaggerated,” he said.

“The numbers are not exaggerated, they’re real. So we’ve got to get an attitudinal change — not in everyone, many people are trying as best as they can to deal with this.”

The backdrop of a divided country — during an election year, no less — certainly hasn’t helped, Fauci said.

“If you’re going to have a pandemic, it makes it much worse when it occurs in the context of a very divisive society, which is what we have here in the United States. I think the election results when you see how close they are, split down the middle 50-50, in some of the races that we’ve seen and the closeness of the split in the country, then often you have public health measures that almost take on a political context,” he said.

“And that is really unfortunate because there’s no room for politics when you’re dealing with a threatening pandemic that’s threatening the lives and the safety of people.”

Fauci typically held back his personal reactions during joint press conferences with Trump, but a video of him seemingly wiping his face — which some viewed as his putting his palm to his forehead — went viral after Trump made a reference to the Deep State.

Asked how he kept his cool during those instances, Fauci said he focused on the gravity of the pandemic.

“I think the thing that gets me through it is to focus, literally like a laser, on the importance of the problem,” he said.

“The difficulties with the political interaction, those are really secondary. The primary thing is what your goal is to end this outbreak, when you focus on that, the other things are more of a distraction than anything else.”

The United States continues to outpace all other countries with COVID-19 cases. The U.S. has reported more than 21.2 million cases of the virus, which is more than twice as much as the next closest country, India, with 10.3 million cases. Canada is 24th on the list, according to tracking by Johns Hopkins University, with more than 626,000 cases.

Health experts have expressed deep concerns that gatherings over Christmas and New Year’s could lead to a surge in new cases at a time when many hospitals in Canada and the U.S. are running out of ICU beds.

Fauci said he expects the situation will get much worse in the coming weeks.

“I think we’re going to have a pretty difficult January superimposed upon the very difficult past month and a half that we’ve had since Thanksgiving. The numbers here in the United States are really stunning,” he said, pointing to average infection rates of 200,000 to 300,000 cases per day.

“We expect as we get into January and maybe the second or third week in January that we may see these numbers go up even more. So it’s been a very difficult situation.”

Vaccines approved by U.S. and Canadian health authorities have offered hope for the new year. The Canadian government aims to vaccinate everyone who wants the vaccine by the end of 2021, and U.S. president-elect Joe Biden has vowed 100 million vaccinations during his first 100 days in office.

Getting as many people vaccinated as quickly as possible is Fauci’s goal, but that will require combatting skepticism from some people about the safety or efficacy of the vaccine. Both the Pfizer and Moderna vaccine are more than 94 per cent effective, according to their manufacturers, and passed multiple rounds of safety testing.

“We need to make sure that everyone is on board so that when vaccines become available to people in various categories, that they very willingly take the vaccine because that will be the answer to this,” he said.