You Are Here Home Health News For some long COVID patients, the return of their senses is gag-inducing 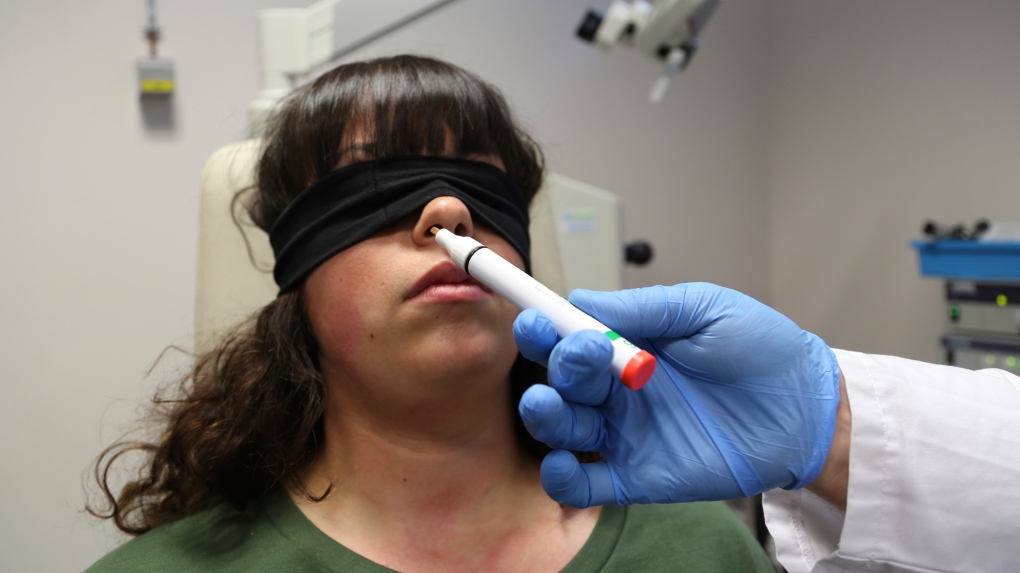 When a patient walked into Dr. Angela Cheung’s clinic and said the place smelled like chicken noodle soup, she knew it wasn’t possible, as food was forbidden. The patient had what is known as phantosmia, a condition where the individual smells an odor that does not exist.

Early in the pandemic, losing one’s sense of smell and taste was among the more widely reported symptoms of COVID-19. While many patients regained these senses within weeks, others took months.

For some, recovering their sense of smell has been a much more challenging journey than losing it: coffee now smells like rotten vegetables and food now smells rancid, like raw sewage, smoke, or is sickly sweet and sour.

The scent of fragrant flowers might now be burnt rubber.

These patients have what is known as parosmia, a condition where their sense of smell is distorted. Even for those with phantosmia, the olfactory hallucination is often not as pleasant as chicken soup, but instead, is a constant smell of something foul, like garbage, experts say.

“It doesn’t even smell like coffee. Usually over time things subside a bit, especially if we treat it,” Cheung, a senior scientist with the University Health Network and Sinai Health System and a leading expert on long COVID, told CTVNews.ca in an interview.

“But there are some people with very debilitating and awful symptoms. So everything smells rotten, they can’t eat, everything makes it nauseating.”

Dr. Marc Tewfik, a surgeon and an associate professor of otolaryngology with McGill University Health Centre, told CTVNews.ca that in most cases, the smells are extremely unpleasant and for those with phantosmia, it can be constant.

He described it as being similar to phantom limb syndrome, a common sensation experienced by amputees where they feel something in a limb that is no longer there. And unlike how we may “get used to” a smell after being in a room for a certain period of time, the scent does not dissipate over time for those with phantosmia, Tewfik said.

One study published in May in Nature’s Communications Medicine found that specific highly odour-active molecules may be the cause for most cases of parosmia and why it triggers disgust.

“It becomes very, very difficult for patients to deal with and certainly, I’ve seen a few patients get to the point where they have suicidal thoughts,” he said, adding that doctors need to look out for these types of situations. Previous research has found links between parosmia and phantosmia and patients with severe depression.

“When it’s a really unpleasant smell, it’s really nauseous. And it’s unrelenting. After days, weeks, months, it just becomes an overriding element of their existence and it becomes very hard for them.”

The good news, he says, is that most of these problems do evolve over time and get better.

For specialists in this field, these olfactory distortions are not unique nor specific to COVID-19. While not necessarily widely or commonly discussed, parosmia and phantosmia are conditions that can be experienced by those with neurological conditions, like dementia, Alzheimer’s, Parkinson’s, and Huntington’s diseases. Those undergoing cancer treatments like radiation and chemotherapy can also get it. Environmental exposures to smoke and chemicals may also cause damage to the nerve and surface cells. Head injuries and concussions, and other viral infections, can all trigger these olfactory changes. But prior to the pandemic, doctors did not routinely test for viruses, for example.

“Because of the scale of COVID, obviously we’re seeing a lot more of that,” Cheung said.

There has been comparatively little research conducted on this particular phenomenon as it relates to COVID-19, with studies so far suggesting that between eight and 23 per cent of patients experience some kind of change to their sense of smell and taste three months after recovery, says Cheung. Her team’s research netted slightly higher percentages.

The British Medical Journal (BMJ) said in an article published in April that parosmia is a common condition following the loss of smell associated with COVID-19, often occurring on average about three months after initial infection. The article added that many patients reported feeling that their symptoms have been trivialized by health-care providers. Another paper called persistent parosmia caused by COVID-19 an emerging symptom that was worth highlighting more in literature in order to increase awareness.

One study found about a third of patients who recovered from COVID-19 had persistent issues with altered smell and tastes, while another study found that for about five per cent of patients, olfactory dysfunction was still present after six months.

Research suggests that the loss of smell and taste is less common with the Omicron variant, but Cheung says she still sees patients reporting this issue, though perhaps a little bit less than before. She attributes the shift to vaccinations, noting that those who became infected only after being vaccinated and then boosted appeared to have fewer issues with lingering symptoms, with some data showing that the odds ratio of getting long COVID is a third among those who are vaccinated.

Experts believe what happens is that there is an injury to the olfactory zone of the nose as a result of inflammation caused by COVID-19. It is generally not a direct injury to the actual olfactory nerve, but to the lining of the cells around those nerves or the epithelium at the mucosal surface. There are hundreds of receptors that send messages to our brains to help identify different scents. When there is an injury, those messages are not being sent correctly. Most people would lose their sense of smell altogether, known as anosmia, or the senses would be reduced, known as hyposmia, but would recover without any abnormal changes.

“We think that maybe in a smaller percentage of patients, there may be actual damage to the olfactory nerve,” said Tewfik.

“When that happens, then sometimes when the nerve recovers or regenerates itself, you can have faulty connections that happen…we think it’s actually a sign of recovery. It means that the nerves are starting to recover, but it can go through this phase where the sensations are altered.”

Cheung explains that during recovery, the nerves are not registering correctly in the brain.

In one paper published in March in the peer-reviewed journal Foods, 84 per cent of patients with smell distortions described the smells as unpleasant or gag-inducing, with coffee, onions, and meat among the worst triggering food items. Researchers said that these items have many molecules in common that generate distortions and have similar formation pathways. Milder cooking processes that do not involve roasting, frying, grilling, or baking, may help mitigate some of the distortions, they suggested.

“Coffee, onions, garlic, fried foods, eggs, and (in a non-vegetarian lifestyle) meat constitute a major part of a typical weekly diet, certainly in western cultures, and it is clear how distortions and sense of disgust in these key items could have a serious impact on diet and nutrition,” the authors wrote.

While most patients improve over time – Tewfik says about three to six months for parosmia – some have very persistent symptoms.

“Rarely, we do see some patients where it really goes a long time, like over one or two years, but those are luckily a very small minority,” he said.

Experts say patients can retrain their sense of smell and taste, though the success rate varies. Retraining involves being exposed to scents they are already familiar with, such as something sweet and fruity versus something more pungent like garlic or onion, and training the brain to recognize and register the smell correctly. Patients are exposed to the different smells for 15 seconds, twice a day, for example.

“It’s like retraining the olfactory system, like teaching people how to walk again after they have had an injury,” Cheung said. “But nerves are not quick to regenerate. It takes time.”

Patients are asked to try and imagine and remember the original scent as they smell an item, Tewfik added.

One case study suggested a combination of a course of a corticosteroid drug, smell training, and nasal irrigation for three months to help with phantosmia.

“It’s a very slow process, it’s not something that usually has an effect immediately,” he added.