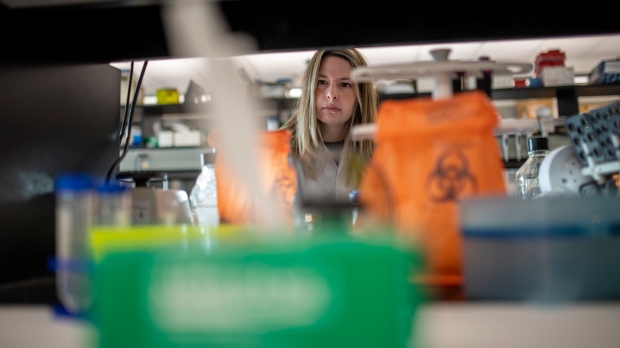 TORONTO — A Saskatchewan-developed COVID-19 vaccine candidate is the latest to be approved for human trials in Canada, and could be ready by the end of 2021, its backers say.

The vaccine candidate is one of two being developed by the Vaccine and Infectious Disease Organization (VIDO) at the University of Saskatchewan.

VIDO reported Tuesday that it has received authorization from Health Canada to begin a Phase 1 clinical trial through the Canadian Center for Vaccinology in Halifax.

Participants will be recruited shortly, VIDO said, with vaccinations starting in January. Volker Gerdts, director and CEO of VIDO, said in a statement that if the three-phase trials prove successful, VIDO’s vaccine candidate could be ready for use by late 2021.

Both of VIDO’s potential vaccines are what are known as protein subunit vaccines, meaning they are created out of specific parts of a dead germ, rather than a live virus or an entire dead germ. Subunit vaccines are often used to protect against hepatitis B, human papillomavirus, whooping cough and shingles, among other viruses and diseases.

Most of the leading vaccines in the race to stop COVID-19 are based on either viral vector or RNA technology. However, VIDO is not alone in developing a subunit vaccine. According to the World Health Organization, 18 of the 61 vaccine candidates that have reached the clinical trial stage are based on protein subunits – including the ones developed by Novavax and Sanofi, for which Canada has reserved 76 million doses and 72 million doses respectively.

Subunit vaccines are typically much simpler to mass-produce than RNA or viral vector vaccines, and do not require ultra-cold storage.

While dozens of potential treatments to mitigate or negate the effects of COVID-19 are in the midst of clinical trials in Canada, only a handful of vaccine candidates have been approved for trials.

In addition to the new VIDO trial, the list includes a vaccine candidate from Quebec-City based Medicago, which entered a combined Phase 2 and 3 trial this month after reporting successful results in early testing. The company said its vaccine candidate, which is unusual in that it is derived from “virus-like particles” found in plants, provoked an antibody response in 100 per cent of the trial subjects.

Toronto’s University Health Network is currently recruiting front-line workers in Ontario to test a potential COVID-19 vaccine that is also the subject of ongoing trials in Australia, Germany, the United Kingdom and the Netherlands. Rounding out the list is CanSino’s Ad5-nCoV, which was approved in the spring to much fanfare but has been at a standstill since, because the promised shipments of the vaccine candidate from China never materialized.

Gerdts, who is leading the development of VIDO’s vaccine candidate, said it is important for the ongoing trials to continue, even though some vaccines developed outside Canada are closer to approval – and in the case of Pfizer’s vaccine, have already been approved here.

“To have sustainable long-term vaccine access, I think it’s important for Canada to continue on with its own vaccines.”