You Are Here Home Health News Health experts warn of dangers of B.1.1.7 variant as it emerges in more provinces 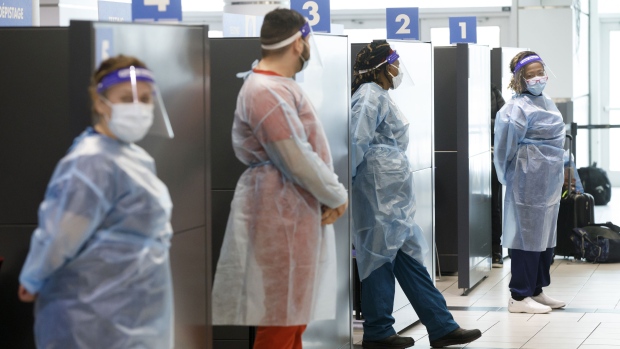 TORONTO — The variant that first emerged in Britain, B.1.1.7, is spreading its fingers across Canada, reaching two new provinces today — and emerging evidence suggests that this variant not only spreads faster, but could be transmitted during relatively brief encounters.

Saskatchewan confirmed Tuesday that two infections involve the B117 variant, while New Brunswick reported three cases of it.

There’s a growing fear across the country that it could lead to rapid outbreaks in seniors’ homes and hospitals.

“It only takes one case to have those consequences,” Dr. Jennifer Russell, Chief Medical Officer of Health for New Brunswick, said.

“It is a really fast-moving strain. It infects people very, very quickly and in higher numbers. And when the strain gets in, for a population it’ll be very difficult to get ahead of it and stay ahead of it with contact tracing and self-isolation as we have done in the past.”

Alberta also reported new cases of variant infections, which may have triggered an outbreak at a daycare. Two Calgary schools have also been placed in quarantine after two children were determined to have attended school while infectious.

In several of these cases, officials are saying travel is a key source.

“It’s not just one or two countries,” Dr. Deena Hinshaw, Alberta’s chief medical officer of health, said. “It’s many different countries where we are seeing people picking up those variants of concern and then coming back into Alberta.”

The variant has also developed another mutation, called E484K, which makes it more likely to evade any immunity people have developed, either naturally or with vaccines.

“It is a really worrying mutation,” Dr. Ravi Gupta, with the University of Cambridge, said. “It’s a variant that transmits faster, so this is a worrying development.”

And doctors in Canada are seeing first-hand how quickly some of the variants of the novel coronavirus can spread, even among people who were following public health precautions. In Ontario, York region has been tracking the B.1.1.7 variant, and according to Dr. Karim Kurji, medical officer of health for the region, the variant might take much less time to infect people than the original strain before it.

“When we interviewed the cases, we discovered that some of them have actually not spent more than a minute, or two minutes, doing some essential shopping in places,” Kurji told CTV News.

“It gives us the impression that this [is] being transmitted very fast indeed.”

The region only had 15 variant cases last week. Now, they have 39 cases. In some situations, Kurji said, the incubation period of the virus is very short as well.

“In one case, it was only 18 hours to two days, so that indicates that [the variant] is very transmissible,” he said.

York region has a specific unit concentrating on cases of the B.1.1.7 variant now, focusing on contact tracing and making that each case is self-isolating.

Many of the cases in York region are not connected directly to travel, showing that there is community spread of this variant.

“For the ones that have acquired it abroad, it is a spectrum of countries,” Kurji said. “Countries like Ghana, Israel, the Maldives, Egypt, the U.K. So that tells me that the variant is probably prevalent across many countries in the world.”

It’s not the only variant causing concern. In the U.K., health officials are recommending aggressive testing of communities to control more contagious variants of the coronavirus after 11 cases of B 1.351, the variant that first emerged in South Africa, were found in one community.

Health experts are concerned that with talk of lifting restrictions, these new variants could trigger another boom in cases because of the much greater risk they pose.

Kurji pointed out that if these more contagious variants become the dominant strain, our vaccination goals have to change.

“For example, the herd immunity that we’ve been aiming for is around 70 per cent vaccination. If we have a predominance of these variants, we may have to aim for herd immunity that might be closer to 85 per cent, which is going to be rather difficult to achieve. And that may mean a protraction of the COVID-19 endemic,” he said.

“So the price is quite high here.”