You Are Here Home Health News Immigrants at higher risk of death from COVID-19 due to work, overcrowded housing: StatCan 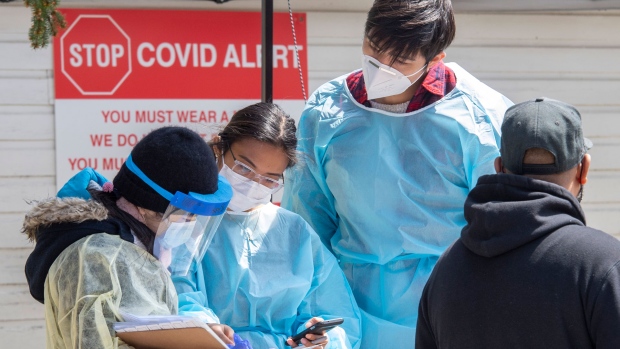 TORONTO — A new study from Statistics Canada reports that immigrants were more likely to die of COVID-19 than Canadian-born individuals during the first wave of the pandemic.

The report, released by StatCan on Wednesday, suggests that immigrants faced a higher mortality risk because they predominantly work in essential industries and live in overcrowded dwellings or multi-generational housing, which increases transmission risk.

While COVID-19 deaths in Canada were overwhelmingly among seniors, the study found that “the share of COVID-19-related deaths among immigrants was greater than their share of the total Canadian population.”

According to the study, immigrants accounted for 25 per cent of Canada’s COVID-19 deaths between March 2020 – when the country’s first virus-related death was reported — and July 4, 2020, despite the group only accounting for 22 per cent of the total population, as per the 2016 Census.

Among those younger than 65, the agency found that immigrants make up 20 per cent of Canada’s population, but accounted for 30 per cent of all COVID-19-related deaths.

“The disproportionate death burden among immigrants was also high among males, as well as in Ontario, Quebec and, particularly, British Columbia, where immigrants comprise 28% of the population, but represented 41% of the COVID-19 deaths,” StatCan said in the study.

StatCan reported that nearly half of COVID-19 deaths in immigrants were reported in Quebec (48 per cent), followed by 45 per cent on Ontario and 4 per cent in B.C.

The study found that the majority of these immigrant deaths were concentrated in major centres, specifically Montreal, Toronto and Vancouver.

StatCan found that close to half of Canada’s total immigrant deaths were of those from “traditional source countries,” including the U.S. and European countries, and 12 per cent were immigrants from Asia.

The agency noted that immigrants are “disproportionally” at increased risk of COVID-19 infection and mortality because they are more likely to be employed in essential industries and occupations that are associated with a greater risk of virus transmission, such as in health care or long-term care settings.

The agency added that lower language proficiency and health literacy may also make it more difficult for some immigrants to understand and follow public-health guidelines to help reduce their risk of COVID-19 infection.

StatCan acknowledged that these factors are specific to Canadian immigrants. The agency noted that evidence from international studies on COVID-19 deaths in immigrants is “mixed.”

According to the study, France reported high immigrant mortality related to COVID-19 while international migrants living in Italy showed no increased risk of poor virus outcomes.