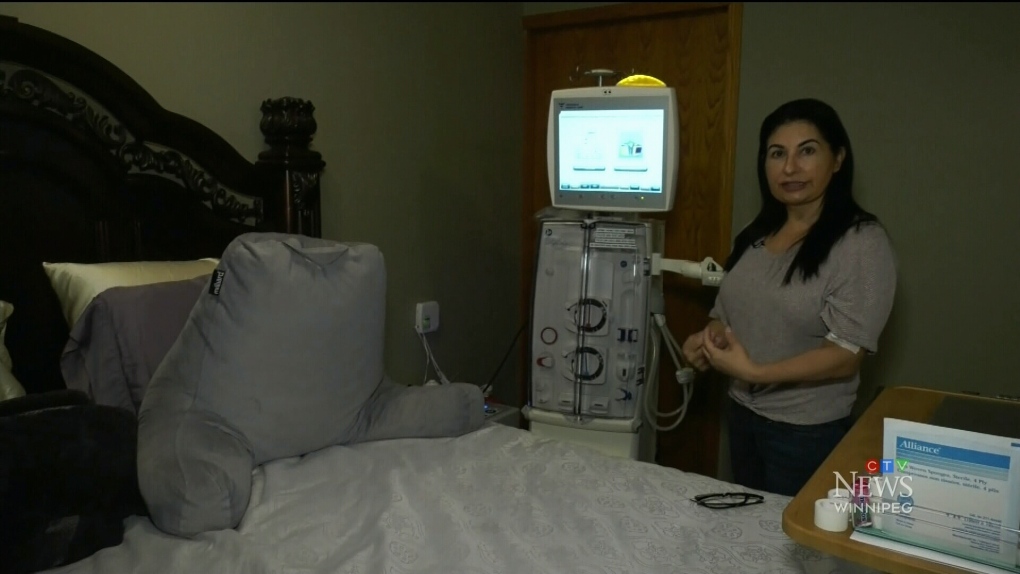 Two Manitobans impacted by kidney disease believe people in their situation should be able to find a donor through a public plea or social media posts.

Karen Sinclair and Amanda Vogiatzakis argue patients waiting for a kidney transplant should be able to find one outside their family and friend circle by posting on social media or sharing their story publicly.

Sinclair has end-stage kidney disease and is currently on dialysis; Vogiatzakis is nearing the two-year mark post-transplant.

“I want to go back to work. I want to enjoy my life, so you know getting a donor, a live donor, would be the fastest way,” said Sinclair, who used to work as a flight attendant before she was diagnosed with kidney disease last year. The single mom said the diagnosis came as a shock as she was otherwise active and healthy but her energy levels weren’t what they used to be.

Sinclair started on dialysis quickly after her diagnosis. She now has a hemodialysis machine in her bedroom that she calls her kidney.

In August of 2021, Sinclair said her daughter posted on Facebook and Instagram about her mom’s search for a kidney donor, hoping someone willing would see it. She said it got hundreds of shares and the response initially made her excited and hopeful that she could find her donor this way.

“I was actually crying, I was so happy that there was so much response, thinking, ‘yes, there we go, maybe somebody is going to come forward,’” she said.

However, she said soon after the post on social media, she got a call from someone at the province’s transplant program informing her that in Manitoba there is a policy preventing a stranger from donating their kidney to someone they don’t know directly.

“There’s no way for anyone to get tested if they do not know you, which is so unfair,” she said. “I was heartbroken.”

In the fall of 2019, Amanda Vogiatzakis was in a very similar situation. Her mother-in-law posted Amanda’s story to Facebook and was shared more than 10,000 times.

“I’ve gotten a lot of private messages,” she told CTV News in an interview done back in September of 2019. “I’ve also gotten tons of e-mails people have called me from around the country. Everybody just wants to help.”

After the overwhelming response, she too was told she needed her donor to be someone she had an established relationship with, but she didn’t want to give up.

Vogiatzakis said she took it upon herself to meet with the people who responded to her story and became friends with them.

“It was scary, but at the same time it was very exciting knowing there was that possibility of meeting the donor and changing my life,” she said. “I’ve actually made quite a few friends from meeting those people that I still talk to.”

One of the people she met this way turned out to be a match and Vogiatzakis received a kidney from them in August of 2020.

“We actually still talk, we hang out quite often. Whether we go for lunch or whatever but, yeah, we do keep in contact,” Vogiatzakis said. “She is like my angel who walks on earth.”

Today, Vogiatzakis has started a new career in real estate and keeps up with her energetic four-year-old son Nick. She believes that if she didn’t put the effort into the search for a donor, she would still be on dialysis today.

Sinclair agrees, who reached out to CTV News this week after seeing a story in MedicalWatch that out of Alberta where someone successfully got more than a dozen people to be tested to see if they are a match.

“If British Columbia can do this, why can’t Manitoba? Why can’t we have the option?” she said.

A spokesperson from BC Transplant also told CTV News adults can donate a kidney to someone as a result of a public appeal, including through social media.

According to a Transplant Manitoba spokesperson, there are two types of living donation in the province; directed donation and non-directed anonymous donation, where a person gifts a kidney completely anonymously or altruistically.

“Transplant Manitoba requires intended pairs to have an established relationship in order to be eligible to participate in the living kidney donation program,” reads the statement to CTV News.

“Direct donation requires an established relationship, which means anonymous donors for specific recipients are not accepted into Transplant Manitoba’s program. If someone connects with the program wanting to donate to someone they do not know, the person may choose to step forward as an anonymous donor ensuring fairness and equity to all those waiting for a transplant.”

The spokesperson also said anonymous living kidney donors are also allowed to participate in the Kidney Paired Donation program through Canadian Blood Services where they may trigger a chain of kidney transplants.

Directed donation is possible when living donors, who are either friends or related to the recipients, are healthy people with good kidney function.