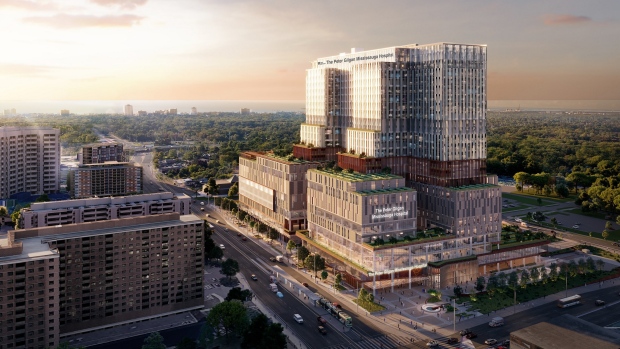 A hospital network in the Greater Toronto Area just received the largest donation in Canadian history.

Trillium Health Partners confirmed the $105 million donation in a news release issued Tuesday, saying the funds will be used to help build a new hospital in Mississauga, Ont. as well as redevelop Queensway Health Centre.

The contribution is being called the largest donation to a hospital in Canadian history.

“We want to thank Peter Gilgan and The Peter Gilgan Foundation for this historic donation that will transform health care for everyone living in the West GTA and help set a new standard of care for our country,” Caroline Riseboro, President and CEO, Trillium Hospital Partners Foundation, said in a statement.

“Peter Gilgan is the most generous benefactor to health care in Canadian history, and we could not be prouder that he and his family have chosen Trillium Health Partners as the recipient of this extraordinary donation.”

Both hospitals will be renamed after Gilgan in appreciation of the donation.

Gilgan, who is also the founder of Mattamy Homes, said he was “thrilled” to support Trillium Health Partners.

“Because I started my business in this region many years ago, this gift is a way of giving back to the community and to recognize our amazing health-care workers for their commitment,” he said in a statement.

The newly named Peter Gilgan Mississauga Hospital is set to replace an existing 62-year-old facility while a new patient tower will be added at the Queensway Health Centre for “complex care and rehabilitation series.”

Officials say the projects combined represent the “largest capital build in Canada’s history” and will add more than 600 hospital beds.

Construction for the Mississauga hospital is expected to begin in 2025, while shovels are scheduled to go into the ground for the Queensway Health Tower in 2024.

Both hospitals have also received provincial funding. In December, Ontario premier Doug Ford said his government would contribute about $27 million in extra operational funding to add more than 500 hospital beds.