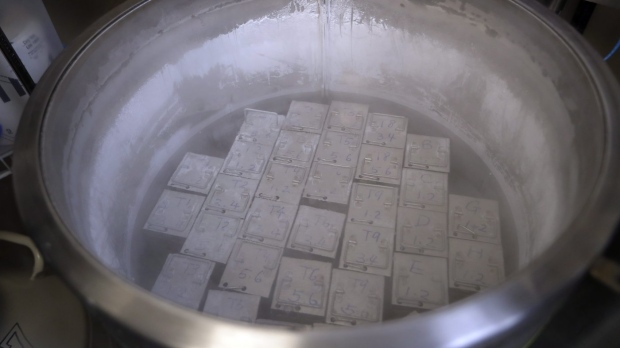 More women have undergone fertility treatment during the pandemic, especially if they’ve been working from home and haven’t had to disclose their health challenges to an employer, says the head of a national advocacy group.

Carolynn Dubé, executive director of Fertility Matters Canada, said clinics across the country have seen a rise in the number of in vitro fertilization, or IVF, procedures in which eggs are fertilized with sperm in a lab before one or more embryos are transferred into the uterus.

The pandemic has also seen a jump in other assisted reproductive procedures like people having their eggs or sperm frozen to have children in the future.

Commuting to an office before or after time-consuming blood work and ultrasounds is stressful enough, but revealing that personal information to an employer adds more pressure for women concerned about moving up within an organization or getting a promotion, Dubé said from Moncton, N.B.

“The pandemic work-from-home life has certainly allowed people to skip that piece of the puzzle, and not have to be so open about a lot of early-morning treatment,” said Dubé, who underwent two cycles of IVF and had embryos transferred five times, making her a mom to three sons — an eight-year-old and twins who are three.

“People are also, in general, looking at their lives a bit differently. You know, ‘I don’t want to put this off anymore,'” she said of some people’s decisions to have expensive fertility treatment during the pandemic.

The average price tag of an IVF cycle, typically completed over three weeks, is about $20,000, and around half of that is for medication, which is covered only in Quebec, Dubé said. That province, along with Ontario, Prince Edward Island, New Brunswick and Manitoba, pays part of the cost for IVF, she said, noting the latter two provinces offer a tax credit and a one-time fertility grant.

Statistics Canada released a study last December suggesting nearly one in five Canadians up to age 49 wanted to delay having children because of the pandemic. It was based on survey data collected between April and June 2021 from one member of a household among a sample of 20,000 dwellings.

The study says people may have delayed or abandoned their plans to have a child out of health concerns, or due to other factors like job loss, reduced income, financial uncertainty or general stress, similar to research findings in other countries.

“On the other hand, for some, the pandemic may have led to a new-found interest in conceiving a child as a result of more time at home and the desire to have a new, enriching experience,” says the study, which did not question respondents specifically about fertility issues.

Dr. Caitlin Dunne, clinical associate professor in the faculty of medicine’s division of reproductive endocrinology and infertility at the University of British Columbia, said the number of fertility treatments had already been rising before the pandemic but that trend was accelerated as people reflected more on what’s most important to them.

“They’re finding that having a family is really at the top of their list,” said Dunne, who is also co-director of the Pacific Centre for Reproductive Medicine, which has three main clinics — two in B.C. and one in Alberta.

The number of IVF cycles in B.C. jumped by 76 per cent last year compared with 2019, Dunne said. Egg-freezing procedures rose by 70 per cent, transfer of frozen embryos went up by 45 per cent and more men got treatment for infertility, she added.

Benoît Laplante, a family demography professor at the Institut national de la recherche scientifique in Montreal, said understanding the decisions of people who have changed their plans to have children as a result of the pandemic could help inform policy changes beyond any payment for fertility treatment.

Parental leave, affordable child-care options and the Canada child benefit for low-income families are “probably more efficient measures” that have the greatest impact in supporting families wanting to have children, Laplante said.

“If you help women to manage the care of their kids, maybe you will foster fertility, but maybe not. That’s the current question,” he said.

Laplante said fertility rates have been dropping steadily since 2008 due to economic reasons as some people started to believe that “things would never, ever be that good for them, for having children.”

Paul Kershaw, associate professor at the School of Population and Public Health at the University of B.C., said unaffordable housing means the dream of one day owning a home with space for children has become further out of reach for many people who have delayed starting a family.

But rental homes are also in short supply, creating high levels of insecurity about the future, Kershaw said.

Many families are also counting on the federal government’s plan for $10-a-day child care, he said.

“We can expect that might give a boost to fertility going forward because now child care isn’t going to cost another rent-sized payment,” said Kershaw, who founded the non-profit group Generation Squeeze over a decade ago to advocate for the concerns of young adults.

This report by The Canadian Press was first published March 16, 2022.