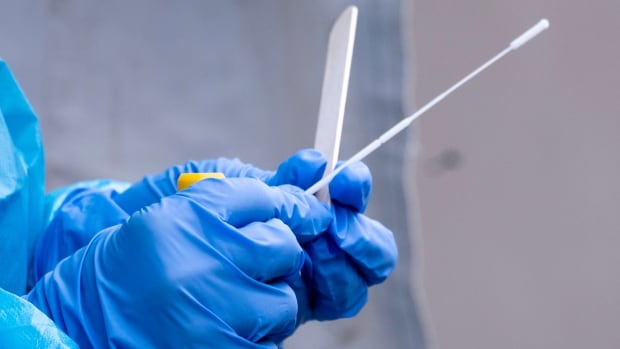 Nova Scotia has no plans to reintroduce public health restrictions even as COVID-19 cases hit an all-time high in the province on Thursday.

In a livestreamed briefing, Dr. Robert Strang, the province’s chief medical officer of health, said his commitment to protecting the health of Nova Scotians has not wavered but it’s time to move on from restrictive measures.

“There’s always going to be some people who feel that we’re going too fast and want to hang on to measures we’ve used for the past two years,” Strang said.

“There’s also a lot of people who feel that we hung on to them for too long.”

In its weekly COVID-19 data update, the province reported a total of 6,991 positive PCR tests, an average of nearly 1,000 new COVID-19 cases per day. This total does not include positive rapid tests.

There were also eight more COVID-19 deaths between March 31 and April 6, and 57 Nova Scotians are currently in hospital due to COVID-19.

Dr. Shelley Deeks, Nova Scotia’s deputy chief medical officer of health, also spoke at the briefing. She said hospitalizations and deaths due to COVID-19 haven’t reached a point of concern.

“The number of hospitalizations as a proportion of all of the total positive tests is still quite low,” she said.

“More than three times lower than in the first wave and that is largely due to the impact of vaccines.”

Deeks says the current proportion of deaths compared to positive cases is almost 10 times lower than it was in the first wave.

Strang was also asked during the briefing about the contrast between public health’s messaging of caution and the provincial government encouraging Nova Scotians to “get back out there.”

“The public health advice and my advice is for people to be out and about, make your choices wisely, follow precautions carefully,” he said.

“We have to learn that COVID is part of our environment and will be here for a long time.”

Nova Scotia lifted nearly all COVID-19 restrictions more than two weeks ago. Some restrictions remain, including mandatory seven-day isolation for anyone who tests positive and continued mask-wearing at health-care facilities, jails and courts. Students also must still wear masks in school for a few more weeks.

Houston told reporters Thursday afternoon that he’s not prepared to re-introduce restrictions, even as some infectious disease experts call for a return to mandatory masks.

“Things have changed. We have high vaccination rates. The variant is different. These are all facts. There’d be lots of people that have opinions on the facts, but the opinions and guidance that I rely on, that the government should rely on, is that of public health,” Houston said.

The premier said “there was a time and place for restrictions” but they weren’t intended to be in place forever. He also said there are ramifications that come with these rules, such as the impact mandates have on Nova Scotians’ mental health and social interactions.

“I don’t want to give the impression for one second that any of this doesn’t weigh on any elected official … They’re tough decisions,” he said.

Unvaccinated Nova Scotians are about 5½ times more likely to be hospitalized due to COVID-19 than someone with two doses of the COVID-19 vaccine. That figure is based on average hospitalization numbers released from the province from Jan. 4 to March 24.

The province’s health authority said Wednesday hospitals across the province are running at 99.5 per cent capacity, with hundreds of staff currently off the job due to COVID-19 — more than at any other point since 2019.