You Are Here Home Health News Nail technicians in Canada exposed to higher levels of chemicals than previously thought: study 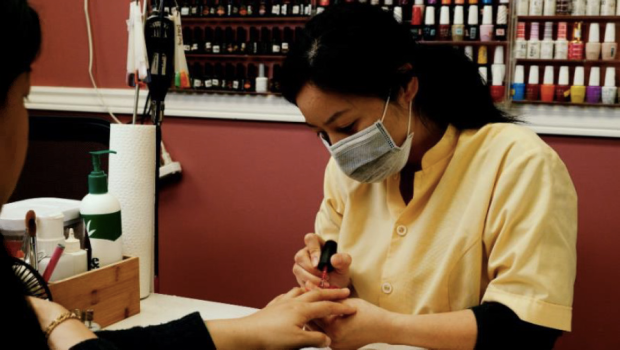 According to a new Canadian study, nail salon workers are exposed to higher levels of some chemicals than electronic waste workers, highlighting the need for more regulation to protect nail technicians.

The study, published Monday in the journal Environmental Science and Technology, is the first assessment of chemical exposures among nail salon technicians in Canada, and found unexpectedly high exposures to several chemicals, including flame retardents, a chemical not known to be in personal care products.

“We were very surprised to find exposures for some chemicals up to 30 times higher among nail salon workers relative to exposures in homes, and up to 10 times higher than in e-waste handling facilities,” Miriam Diamond, co-author and professor at the University of Toronto’s department of earth sciences, said in a press release.

Nail care and nail artistry is a thriving industry, with most businesses located in urban settings.

In Toronto alone, approximately 1,500 licensed establishments were operating in 2019, the study stated. This means there are countless workers who are dealing on the daily with a level of chemicals that, until now, was largely unknown.

It’s a problem that nail technicians have been aware of for a long time.

“The nail salons use all kinds of chemicals, everything,” Jackie Liang told CTVNews.ca in a phone interview. “Especially the acetone, you know, every time I touch I can feel it, it’s going to my body, I can feel it. And also the smell.”

When she applies base coats, the smell always makes her cough, she said.

The 42-year-old, who works in Toronto, has been a nail technician for more than a decade. Her time working in this field has left its mark.

“My skin, especially my index finger, I can feel I have damage there,” she said.

“A lot of my colleagues, a lot of nail technicians like me, they immigrants and have a language barrier and they know this is not good, but we just [have] no power.”

Despite technicians speaking up, not much attention has been given to pinpointing the extent of the risk that these chemicals can pose to workers.

This new study from the University of Toronto, run in collaboration with Parkdale Queen West Community Health Centre and the Healthy Nail Salons Network, sought to discover specifically what chemicals technicians in discount salons are faced with.

To evaluate the exposure levels that workers were facing, researchers had 45 nail salon workers in 18 nail salons in Toronto wear brooches and wristbands to sample chemicals in the air while they were at work for one shift ranging from four to nine hours.

Each participating worker wore three different samplers simultaneously: one Occupational Safety and Health Administration (OSHA) active air sampler on their collar to sample the air within their breathing range, and then two silicon passive samplers.

The median day of work for the participating technicians included performing three manicures, two pedicures, one set of artificial nails and one other service that didn’t involve nails.

When researchers looked at the samplers, they found that the level of chemicals in the air was higher than they’d been expecting.

Researchers detected seven phthalates and five organophosphate esters (OPEs). Phthalate plasticizers are chemicals that make plastics more durable, and they are commonly found in personal care products. But OPEs are primarily used as not just plasticizers but flame retardants — something researchers hadn’t expected to find high levels of in nail salons.

The levels of diethyl phthalate (DEP) were twice that of what is found in the average Canadian office, while the median level of tris(2-carboxyethyl)phosphine (TCEP) and tris(1-chloro-2-propyl) phosphate (TCIPP) — flame retardants commonly found in indoor spaces — were around 28 times higher than in the average U.S. home, according to the study.

“Median OPE levels in wristbands from nail salon workers were comparable for TCEP, but at least three times higher for TCIPP, TDCIPP, and TPhP compared to those for e-waste workers in Canada and Bangladesh,” the study stated.

Although researchers had workers take note of which nail services they provided, they found that the number of services provided in one shift did not significantly affect the level of chemicals the sensors picked up.

Not all of the findings were negative. A specific chemical that has been banned from use in cosmetics under the Canadian Environmental Protection Act was detected at only low levels.

“The finding of low exposure to the plasticizer DEHP is important – it shows the current regulations for this compound are working,” Diamond said.

The study noted that DEHP can be found in building products such as vinyl floor tiles or seat covers, which could explain why it was detected at all.

THE TOLL ON WORKERS

When Liang heard the results of this new study, she wasn’t surprised.

“I’m not surprised because we know,” she said. “As a nail technician, we know the chemicals, it’s not good for our health.

“Most nail salons are small, they don’t have a good ventilation system, and also nail technicians, we’re working long hours.”

She added that when working with these type of chemicals, the impact isn’t obvious right away, making it hard to clearly connect the cause.

“The chemical things is it’s not ‘when you touch you die’, it’s the long term exposure, because you don’t know if you got cancer because you work as nail technician or maybe [it’s] just your body,” she said.

Several of the chemicals detected in the salons have been linked to health problems.

“Concern could arise as exposure to some phthalates and OPEs and their metabolites have been associated with increased risk of papillary thyroid cancer in adults, higher risks of endometriosis, increase in uterine volume, decreased female fecundity, and reduction in male semen quality,” the study stated.

“There is a particular concern for nail salon workers regarding reproductive effects because most of the workers in this industry are female and in their reproductive years.”

The overwhelming majority of nail technicians are women — in this study, 93 per cent of workers who participated were women aged 21-58.

“Nail technicians have been raising concerns about the impact of their work on their bodies, including worries about reproductive, respiratory, skin and musculoskeletal health for many years now,” Victoria Arrandale, co-author and assistant professor at the University of Toronto’s Dalla Lana School of Public Health, said in the release.

Liang said it feels like when nail technicians themselves try to speak up, no one pays attention.

“Maybe our voice too low, maybe they don’t want to hear anything from us.”

She said it’s important for more people and governments to pay attention to this issue so that nail technicians can continue to provide their services without sacrificing their health.

“I really like this job,” she said. “I like beauty things. When I do the clients, the nails, I feel so happy when they’re happy. They smile, they say, ‘thank you’, you know, ‘this is beautiful.’”

She pointed out that newer products such as dipping powders can be advertised as being organic even though dipping powders still need to be sealed with other things such as activators, which means those chemicals are still involved.

“This research shows us that our federal government needs to pay attention to making the products that are used in nail salons safer, for both customers and nail technicians,” Van Tran, nail technician and Nail Salon Outreach Worker at Parkdale Queen West Community Health Centre, said in the release.

Liang was unsure if one study could make a difference, but hopes that Canada is on the pathway towards better regulations.

“I love doing my job, I like to see my workplace have the good product, safer products,” she said. “It’s good for clients and also for us. For both of us.”