The Ontario government is introducing legislation to that would require some workplaces to carry Naloxone kits soon.

High-risk workplaces, such as construction sites, nightclubs and bars, will receive the kits, if passed, the government says.

Naloxone is a medication that can save a life, temporarily reversing the effects of an opioid overdose giving time for medical help to arrive.

“This will mean thousands of employers in all industries will have kits on site. This is about saving lives. We have to be ambitious about fighting this epidemic,” Ontario Minister of Labour Monte McNaughton said at a press conference Tuesday morning.

The Ministry says that, in under a year, between March 2020 and January 2021, about 2,500 people died from opioid-related causes in Ontario.

Of those employed, 30 per cent were construction workers.

In Toronto, fatal suspected opioid overdose calls by the Toronto Paramedic Service are on the rise. The red line in the image below is for 2019, blue is for 2020 and green, at the top, is for 2021. The highest points near 40 deaths a month. 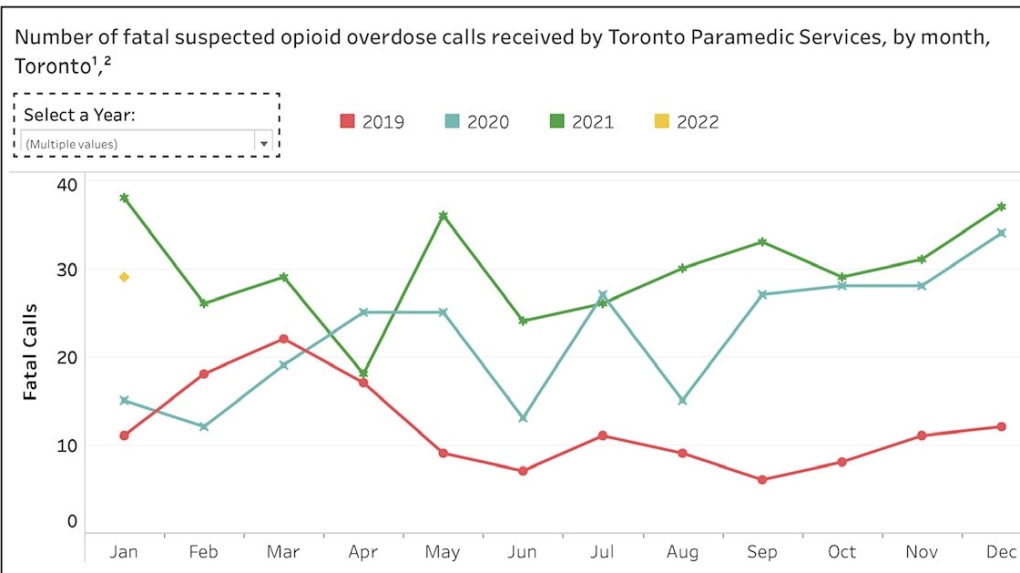 Paul Rosen, 62, is a gold medal Paralympian and spoke at the government’s news conference. He said his addiction first started many years ago with a hockey injury and pain killers.

“I carry my kit with me as a recovering addict for everyone out there who needs the help,” Rosen said.

“The opioid crisis in Ontario is massive, and it’s not the stereotypical addict that we think of. This is killing so many young men, young women.”

At least one harm reduction organization says different strategies are needed to deal with the root of the crisis and save more lives.

The Ontario Harm Reduction Network (OHRN) said a focus on the construction industry and de-stigmatizing drug use is a good thing, but most of the deaths are happening in homes, shelters and on the street.

“I don’t think this initiative is going to save too many lives. People are not dying on construction sites. They are dying at home, alone from a toxic drug supply,” OHRN Director, Nick Boyce, said.

The root of the problem, he said, is the toxic drug supply.

Boyce said Naloxone has been widely available at Ontario pharmacies without a prescription since 2017 — and with an average of 230 people dying in the province a month, going up year over year, other steps could save more lives.

“We can initiate safer supply programs, where we give people prescription opioids instead of relying on a toxic illegal supply,” he said. “We could restrike the overdose task force, which has not met in four years, … including a scaling up of harm reduction initiatives for people who want and need treatment.”

He said the toxic supply has been increasing even previous to the pandemic.

If the legislation passes, Naloxone kits could be on work sites later this year, distribution facilitated by the Ministry of Labour.

It’s believed the number at each location will correlate to the proportion of risk, enforced when a labour inspector visits the site to make sure the kits are available.