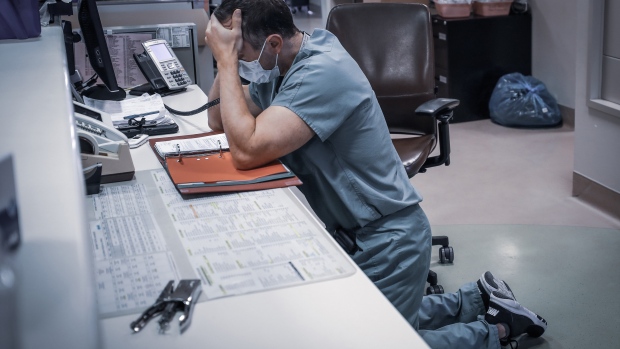 MONTREAL — Nursing students and recent graduates from nursing programs in Quebec say working conditions in the province’s public health-care system are pushing them into the private sector, further exacerbating a shortage of nurses in provincial hospitals.

Audrey-Ann Bissonnette-Clermont, 27, graduated with a nursing degree a year ago. While she started her career in a Montreal emergency room, she said she’s now switched to telemedicine and is working for a private company.

In some ways, it was a difficult choice, she said.

“I got into the profession because I like people, I like to work with people,” she said in an interview. It’s been hard to leave behind the face-to-face contact, she added, “but it’s not difficult for my mental health.”

Unlike some nurses in Quebec hospitals, Bissonnette-Clermont said she didn’t face a significant amount of mandatory overtime during the COVID-19 pandemic. The past year, however, was still draining.

Bissonnette-Clermont, president of nursing student group the Association etudiante en sciences infirmieres du Quebec, said the pandemic has been hard for Quebec’s aspiring nurses as internships were cancelled and trainees were denied time off to study.

“We were required to work full-time, we were asked to work mandatory overtime,” she said.

That experience is pushing students out of Quebec’s public health-care system and towards private sector health-care providers, including placement agencies that provide nurses to the public system — but offer higher pay and more control over working hours, she said.

“What we see a lot is that new nurses are burned out, they stop working after five, six months,” she said. “I don’t think it’s normal to be burned out after a few months at your first job. That should set off alarm bells, a red flag, for managers, for the government.”

Beatrice Landry-Belleau, who finished a bachelor’s degree in nursing in May 2021, said her experiences during the pandemic reinforced her decision to work in front-line health care — but not in a hospital setting.

While she said she loves nursing, she said she wants a balance between her work and her life. Not being able to refuse overtime in a hospital setting concerns her.

“For me, it’s very difficult to understand how you can go to work and not know when you can go back home,” she said in an interview, adding she’d welcome work in a neighbourhood, youth or refugee clinic or a nurse-run cooperative.

Nathalie Stake-Doucet, the president of the Quebec Nurses’ Association, said the situation that new nurses faced during the pandemic is part of a larger problem with the way the profession is treated in the province.

“It’s demoralizing for nursing students to go into (internships) and clinical rotations where they see forced overtime, violence, unbearable workloads and things like that,” Stake-Doucet said in an interview. “We’ve been called heroes and this and that, but that is not at all reflected in the way we’re treated at work.”

She said mandatory overtime and cancelled vacations are pushing nurses out of the profession.

“Nurses have to be able to have a life,” she said. “We’re not nuns anymore, when you become a nurse you’re not planning on living at the hospital, you still want a family, friends, a normal life and a job.”

Stake-Doucet said Quebec doesn’t have a shortage of nurses; the problem is that nurses don’t want to work in the public system.

“There are actually enough nurses,” she said. “We just are doing nothing to attract and retain them into the public health-care system.”

Stake-Doucet describes the government’s approach to the issue as coercive, saying it limits when placement agencies can provide nurses to the public sector.

Such a strategy, she fears, may push people out of the profession entirely. The province has barred the agencies from using people hired away from regional health authorities to work on contracts with those same authorities.

Rebecca Guenard-Chouinard, a spokeswoman for Health Minister Christian Dube, said the government is proud of the steps it has taken to limit the “exodus” to the private sector.

“Our government reiterates its commitment to providing attractive working conditions for health-care workers in the public sector. We are continuing the work, everywhere in Quebec,” she wrote in an email, adding that the government will continue to reduce its use of placement agencies.

She said recent agreements in principle with nurse’s unions will improve working conditions by reducing overtime and boosting staff as well as salaries.