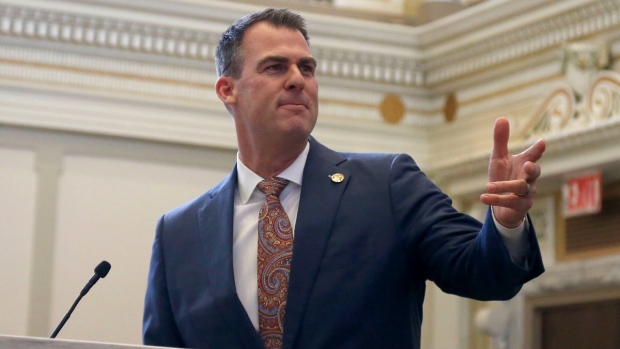 OKLAHOMA CITY — Oklahoma Gov. Kevin Stitt signed a bill into law on Tuesday that makes it a felony to perform an abortion, punishable by up to 10 years in prison, as part of an aggressive push in Republican-led states across the country to scale back abortion rights.

The bill, which takes effect 90 days after the Legislature adjourns next month, makes an exception only for an abortion performed to save the life of the mother. Abortion rights advocates say the bill signed by the GOP governor is certain to face a legal challenge.

Its passage comes as the conservative U.S. Supreme Court considers ratcheting back abortion rights that have been in place for nearly 50 years.

“We want to outlaw abortion in the state of Oklahoma,” Stitt said during a signing ceremony for the bill, flanked by anti-abortion lawmakers, clergy and students. “I promised Oklahomans that I would sign every pro-life bill that hits my desk, and that’s what we’re doing here today.”

Under the bill, anyone convicted of performing an abortion would face up to 10 years in prison and a US$100,000 fine. It does not authorize criminal charges against a woman for receiving an abortion.

Sen. Nathan Dahm, a Broken Arrow Republican now running for Congress who wrote the bill, called it the “strongest pro-life legislation in the country right now, which effectively eliminates abortion in Oklahoma.”

Abortion rights advocates say the bill is clearly unconstitutional, and similar laws approved recently in Arkansas and Alabama have been blocked by federal courts.

“Protecting the right recognized in Roe v. Wade continues to be a priority for the Biden-Harris Administration, and we call on Congress to pass the Women’s Health Protection Act, which would shut down these attacks and codify this long-recognized, constitutional right,” Psaki said.

Although similar anti-abortion bills approved by the Oklahoma Legislature in recent years have been stopped as unconstitutional, anti-abortion lawmakers have been buoyed by the U.S. Supreme Court’s decision to allow new Texas abortion restrictions to remain in place.

The new Texas law, the most restrictive anti-abortion law to take effect in the U.S. in decades, leaves enforcement up to private citizens, who are entitled to collect what critics call a “bounty” of $10,000 if they bring a successful lawsuit against a provider or anyone who helps a patient obtain an abortion.

“The U.S. Supreme Court’s failure to stop Texas from nullifying the constitutional right to abortion has emboldened other states to do the same,” Nancy Northup, president and CEO of the New York-based Center for Reproductive Rights, said in a statement. “We’ve sued the state of Oklahoma ten times in the last decade to protect abortion access and we will challenge this law as well to stop this travesty from ever taking effect.”

Several states, including Oklahoma, are pursuing legislation similar to the Texas law this year.

The Texas law bans abortion after roughly six weeks of pregnancy and makes no exceptions in cases of rape or incest. Abortions in Texas have plummeted by about 50% since the law took effect, while the number of Texans going to clinics out of state and requesting abortion pills online has gone up. If the Oklahoma bill were allowed to take effect, women from Texas seeking abortions would be forced to travel further distances to Democratic-led states like Colorado and New Mexico, which have recently passed laws to protect abortion access.

One of the Texas-style Oklahoma bills that is one vote away from the governor’s desk would ban abortions from the moment of conception and would take effect immediately upon the governor’s signature.

The U.S. Supreme Court’s conservative majority also has indicated they would uphold a Mississippi law that bans abortions after 15 weeks of pregnancy and allow states to ban abortion much earlier. The court may even overturn the nationwide right to abortion that has existed for nearly 50 years.

I intend to make Oklahoma the most-pro life state in the country.