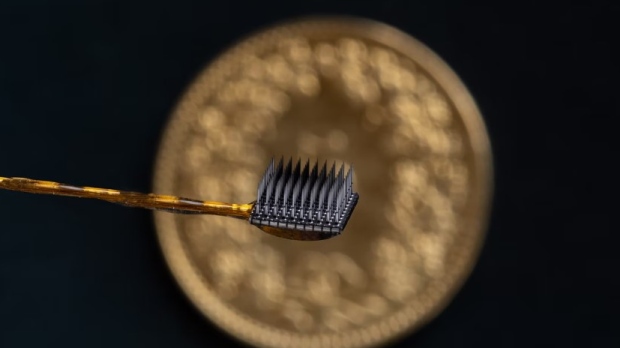 Researchers have enabled a non-verbal person with an advanced degenerative disease to communicate with the aid of two brain implants.

The findings of a two-year clinical study, published in the journal Nature Communications on Tuesday, suggest that communication with patients who are completely paralyzed with amyotrophic lateral sclerosis (ALS) is possible.

ALS, also known as Lou Gehrig’s disease, is a progressive neuromuscular condition that causes patients to lose motor function. While ALS is relatively rare, the number of people with the condition globally is increasing, with more than 300,000 people projected to be living with the disease by 2040. There is currently no cure for ALS.

The study’s subject is a man in his 30s with a quickly progressing form of ALS. As part of the study, the patient had two “intracortical microelectrode arrays” – or two small implants with 64 needles on each to record neural signals – surgically inserted into the cortex of the brain responsible for movement. Wires are fed from the implants to a connector that is attached to the skull of the patient. On the outside, an amplifier is fixed to the connector, which digitizes the information and sends it to a computer.

While the patient is unable to move, the implants are able to read his brain signals and record his impulses to move. These brain signals are sent to the computer in real-time, which learns to categorize these attempts at movement into a “yes” or “no” response. This allows others to ask the patient yes or no questions. A spelling machine can also be used to read letters out loud to the patient, who can respond “yes” or “no” to each letter and spell out words.

Previous machines have allowed ALS patients, such as the world-famous physicist Stephen Hawking, to communicate using breath or eye movements to select letters or other responses. But completely locked-in ALS patients, like the subject of the Wyss Center study, lose control of even their eye movements and ability to breathe, and therefore cannot use those devices.

“This study answers a long-standing question about whether people with complete locked-in syndrome – who have lost all voluntary muscle control, including movement of the eyes or mouth – also lose the ability of their brain to generate commands for communication,” said Dr. Jonas Zimmermann, a neuroscientist at the Wyss Center in Geneva and one of the authors of the study.

The study’s subject was diagnosed with ALS in August 2015. By the end of that same year, he had lost the ability to walk or speak, and in July 2016, the patient needed a ventilator to breathe. In August 2016, he began using an eye-tracking device to communicate, but by August of the following year, he had lost the ability to fixate his gaze and could no longer use the device. The patient’s family eventually switched to a system in which they pointed to letters on a paper – any eye movement meant “yes” and no movement at all meant “no.”

As the patient and his family anticipated the loss of his ability to move his eyes at all, they reached out to two of the study’s authors for alternative approaches to communication.

“He’s married and has a small child,” Zimmermann said in a video released by the Wyss Center about the study. “His biggest wish was to be able to communicate, talk to his son as he was growing up.”

The brain implants are not yet available for use outside of a clinical research capacity, but researchers said they hope the devices could eventually provide locked-in ALS patients with independence and dignity.

“This study has (demonstrated) that, with the involvement of family or care givers, the system can in principle be used at home,” said George Kouvas, the chief technology officer of the Wyss Center. “This is an important step for people living with ALS who are being cared for outside the hospital environment.”