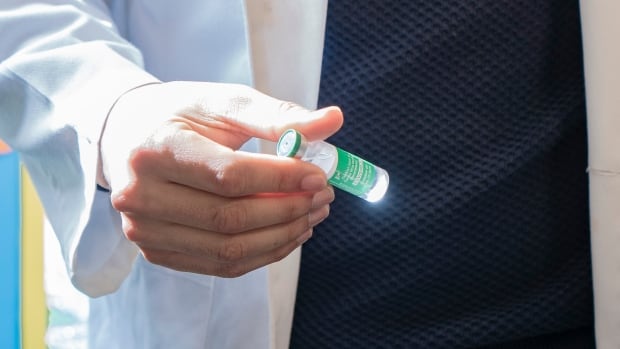 Some Alberta pharmacies say they have little to no stock of AstraZeneca despite being included in the province’s COVID-19 vaccine rollout.

Alberta opened up eligibility for AstraZeneca to people between 40 and 54 on Tuesday and the uptake was swift.

More appointments were made for AstraZeneca in the span of two and half hours on Tuesday than during all of last week, Alberta Health Services says.

By 10:30 a.m., more than 27,000 people had booked appointments. And there were long lines outside the AHS walk-in clinics at the Edmonton Expo Centre and the Telus Convention Centre in Calgary.

But Greg Bueckert, who owns a pharmacy in Medicine Hat, says he has only been able to vaccinate a handful of people so far.

“We’ve had all kinds of publicity about the Astra being available to a younger cohort now and there’s no supplies. The same day that it was announced, we received notification that there was no vaccine available, period. With no date as to when they would be available,” he said.

At Carestar Pharmacy in Calgary, Jim So spent all day Tuesday answering calls from people over 40 and newly eligible for the AstraZeneca vaccine.

“They’re ready to get the shot, however the pharmacies are having a tough time to get the order in because the wholesaler that is responsible for the supply has run out of stock at this moment.”

With no vials, So placed 200 people on a wait list on Tuesday alone.

Premier Jason Kenney says the province’s vaccine rollout is extremely complex and he’s confident any supply problems will be addressed by AHS.

Alberta has 160,000 doses of AstraZeneca left, but Kenney says there is no indication when the next shipment will arrive.

According to AHS, 2,726 Albertans received their AstraZeneca immunization at provincial sites on Tuesday, including 2,161 in Calgary, and 497 in Edmonton.

Another 1,500 people got shots at the AHS walk-in clinics in Edmonton and Calgary.

On Thursday, an additional 3,803 Albertans are booked to get the AstraZeneca vaccine at an AHS site.

And another 1,000 walk-in appointments will be available at the AHS walk-in clinics at the Edmonton Expo Centre and the Telus Convention Centre in Calgary through the weekend.

There are still more than 25,000 appointments up for grabs for the AstraZeneca vaccine in the next 14 days at provincial sites across the province, AHS says.