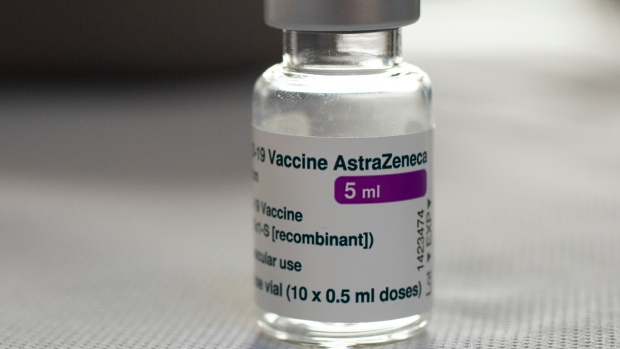 MONTREAL – A woman in her 50s has died of a blood clot that occurred after receiving the Oxford-AstraZeneca vaccine, the Quebec government announced Tuesday.

Public health director Dr. Horacio Arruda told a news conference he believes it is the first death in Canada to be potentially linked to the vaccine.

Both Arruda and Health Minister Christian Dube said the government had always known side-effects could occur in a very small number of people but stressed that the vaccine saves far more lives than it endangers.

Premier Francois Legault offered condolences to the victim’s family. “I’m sad to know that a 54-year-old woman, in good shape â€¦ died because she was vaccinated,” Legault said in Quebec City. He called the news “hard to take” but said it was not unexpected.

Legault began the news conference with an announcement that he would allow Quebec City-area elementary schools to reopen next week and would push back the evening curfew in Montreal from 8 p.m. to 9:30 p.m. beginning Monday.

But the optimism over declining case counts was overshadowed by news of the woman’s death.

Dube said the province is investigating four cases of serious complications out of some 400,000 people who have received the AstraZeneca vaccine. That puts the rate of complications at about one in 100,000 doses, which he said is consistent with what has been observed elsewhere.

“That’s very unfortunate and we’re sad about it, but that’s the price of vaccination,” he said.

Health Canada has said the Oxford-AstraZeneca is safe and effective despite the fact that there’s evidence to suggest it may cause very rare blood clots.

The clotting syndrome has been labelled VIPIT, short for vaccine-induced immune thrombotic thrombocytopenia. It occurs when the body’s immune system begins to attack blood platelets, leading to clots, and it is treatable.

Arruda said a laboratory in Hamilton, Ont., confirmed the woman died from a blood clot to the brain associated with antibodies that created a platelet problem.

Currently the province is offering the vaccine to Quebecers between the ages of 45 and 79, and Arruda said there are no plans to change that strategy.

The news came as health officials reported fewer than 1,000 new cases of COVID-19 in the province for the second day in a row, with 899 new infections. There were 14 additional deaths, including three in the previous 24 hours. Hospitalizations rose by three, to 667, and 170 people were in intensive care, an increase of three.

Legault said that despite some loosening, special measures, including an 8 p.m. curfew and the closure of high schools and non-essential businesses, will remain in place in harder hit parts of the province – Quebec City, Chaudiere-Appalaches and the Outaouais region bordering Ontario. Primary schools in the latter region remain closed.

Legault said further easing of restrictions will be done gradually.

“Our experts tell us that we can be optimistic, but we also need to be careful,” he said. “We’re getting out of the tunnel, but the train of the third wave will hit us if we don’t progress gradually.”

Also on Tuesday, Quebecers with physical or intellectual disabilities or autism were able to start booking vaccine appointments. Legault said pregnant women would be able to register for vaccines beginning Wednesday.

The province administered 45,757 doses of vaccine since the previous update, for a total of 2,916,897 shots. Dube has said the province plans to open vaccination to the remaining members of the general public by the end of May.

But on Tuesday, he hinted the eligibility may be expanded sooner due to a lower-than-expected number of bookings for appointments set aside for people with chronic illnesses and disabilities. He said a decision on the next steps in the program would be made in the coming days.

This report by The Canadian Press was first published April 27, 2021.