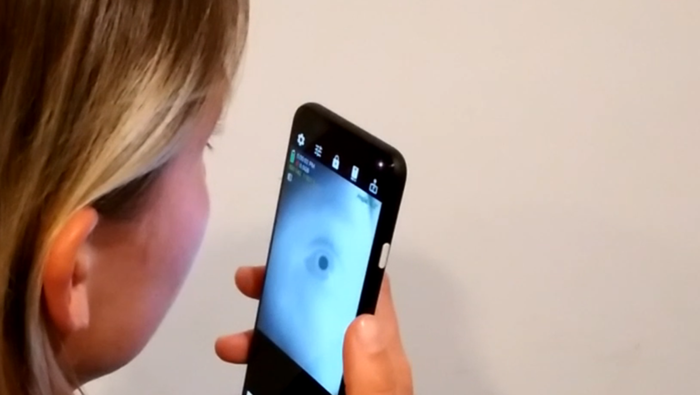 Researchers at the University of California San Diego say they’ve developed a smartphone app that could screen users for neurological conditions by scanning their eye.

The researchers outlined their findings in a paper published on Friday that will be presented at the ACM Computer Human Interaction Conference on Human Factors in Computing this weekend. They say the app could allow people to assess themselves for Alzheimer’s disease, ADHD, schizophrenia, Parkinson’s Disease and more.

Analyzing how a person’s pupil dilates can offer early clues when it comes to detecting neurological conditions. Pupils tend to dilate when a person has to process a challenging cognitive task. Previous studies have found that those with mild cognitive impairment tend to show more pupil dilatation than those without any cognitive issues.

“While there is still a lot of work to be done, I am excited about the potential for using this technology to bring neurological screening out of clinical lab settings and into homes,” said first author Colin Barry in a news release publisehd Friday. “We hope that this opens the door to novel explorations of using smartphones to detect and monitor potential health problems earlier on.”

The app takes advantage of the two front-facing cameras found on most modern smartphones. The phone’s selfie camera is used to capture the distance between the phone and the user. The app also uses the phone’s infrared camera, equipped on phones that support facial recognition technologies such as Apple’s Face ID, in order to differentiate the pupil from the iris.

Typically, measuring pupil response requires specialized and expensive medical equipment. However, the researchers say the smartphone app can be a low-cost and scalable alternative with a high degree of accuracy to help get more people screened earlier.

“A scalable smartphone assessment tool that can be used for large-scale community screenings could facilitate the development of pupil response tests as minimally-invasive and inexpensive tests to aid in the detection and understanding of diseases like Alzheimer’s disease. This could have a huge public health impact,” said study co-author Eric Granholm in the news release.