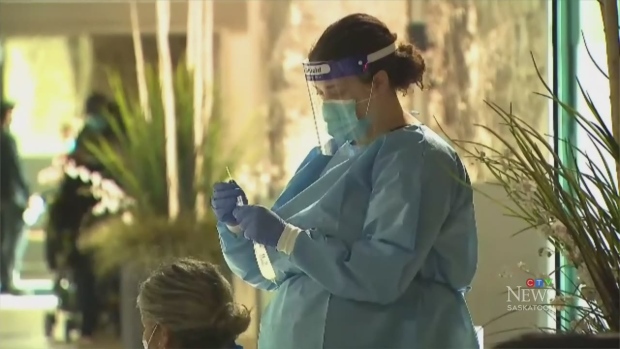 SASKATOON — You can now pay for a COVID-19 test in Saskatchewan.

The tests cost $150 and people can get their results in up to 48 hours.

The private tests are designed for people not showing COVID-19 symptoms, but need proof of a negative test result for travel or work.

Deobald said the company’s phone has been ringing off the hook, from both small businesses and big corporations, since announcing the paid testing service.

The partnership follows the province’s struggle to meet its target of 4,000 COVID-19 tests per day.

“Our testing capacity is not where it needs to be so any public-private partnership that we can get, that pushes up into a higher capacity is good,” microbiologist Kyle Anderson said.

While Canada waits for a vaccine, Anderson believes mass testing is the best tool to fight the illness — but there shouldn’t be a financial barrier to testing.

“As long as you can still get in line to get a test and the government is trying to do as much testing as they can, I think supplementing that with industry is okay,” Anderson said.

“But I don’t think we should ever go to a system where we say, ‘Oh, the government’s just done with testing now because you can do it all privately.’”

If airlines and workplaces require proof of a negative COVID-19 test, it’s key public testing keeps up with demand, said Cory Neudorf, a public health professor at the University of Saskatchewan

While Quantum’s private testing is only for travellers and employers right now, Saskatchewan Health Minister Paul Merriman said it could expand.

“We want to make sure we do have a type of backup that if something does happen with that machinery, we have a physical backup and we have something up and ready,” Merriman said.

Quantum Genetix is prepared to process up to 350 tests per day by the end of December.

Reinfections could be more likely among those with a mild first case of COVID-19: case study

Inside the ER in Laval, Que., one of the worst hit cities in Canada

Variants will likely make up 40% of Ontario’s COVID-19 cases by mid-March, modelling predicts