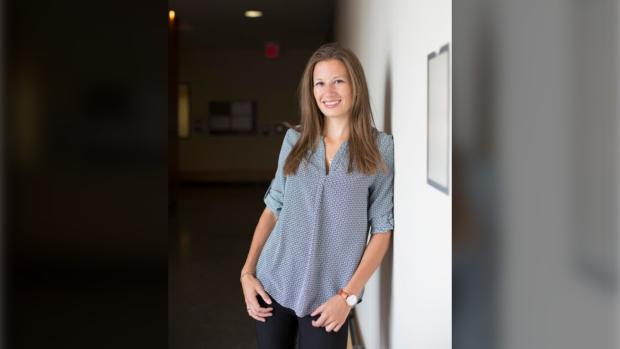 TORONTO — Pro-hockey-player-turned doctor Karolina Urban came upon her interest in concussion diagnosis and recovery the hard way. Playing for the University of Toronto Varsity Blues in 2008, she took a late open-ice hit from her side. She was diagnosed with a concussion and followed the appropriate protocols, but when she returned to the ice, she realized something was wrong.

“I actually cleared all the testing, all the baseline testing that they had in place, and when I got back on the ice I noticed I (was) not the same player. I was missing pucks under my stick, I was still getting very lightheaded,” she told CTVnews.ca in an interview. “I noticed there was a disconnect between what I was feeling and what the testing was showing.”

The experience illustrated for her the lack of research at the time about concussions, and in particular, the dearth of research and diagnostic tools tailored for women who suffer concussions.

Urban ended up playing five years of pro hockey in the Canadian Women’s Hockey League and the European Women’s Hockey League, winning a Clarkson Cup with the Markham Thunder in 2018. But the concussion at UofT – the first of two she suffered – and her realization about the lack of research around head injuries in women inspired her to pursue her degree in neuroscience and focus on concussions.

The issue of concussions has emerged in recent years largely in the context of male sports leagues like the NFL and NHL, and its links to long-term dangers, such as early onset dementia.

But there has, until recently, been little attention paid to concussions suffered by women, despite research that suggests women suffer concussions differently than men, including experiencing worse symptoms and requiring longer recovery times.

Diagnostic methods are typically developed for the male brain, and research is often funded by the deep pockets associated with men’s professional sports leagues, which leads to male-focused treatment protocols.

It’s a reality that can leave women, particularly athletes, susceptible to misdiagnosis, improper treatment, and the risk of frightening long-term effects.

“We’re still trying to understand the differences, but what we do know is that there are hormonal influences that happen after the fact, and we’re not sure how that affects brain recovery, and there needs to be a lot more time and money spent on how females differ from males in terms of recovery,” says Urban, currently Vice-President of Scientific and Medical Affairs at biopharma company Avicanna.

Fortunately, new research is beginning to look at how women specifically suffer and react to concussions, and a new study carried out by Ontario startup RENITA Medical and the Hospital for Sick Children is hoping to both shed light on concussions in women and address the broader challenge of how to accurately diagnose concussions.

The study is using magnetoencephalography, or MEG, neuroimaging technology to scan brains of women who have suffered concussions and those who have not in order to compare brain activity.

“One of the main problems with concussion is that it’s incredibly difficult to diagnose objectively,” says Benjamin Dunkley, a cognitive neuroscientist at Sick Kids, who is leading the study.

Current diagnostic techniques rely heavily on self-reported symptoms, such as dizziness, fatigue, or light-sensitivity problems. But self-reporting is subjective, and can be unreliable.

“There are no radiological indications. By that what we mean is that when we look at an MRI or a CT scan, there are no lesions in the brain that are visible in a concussion,” he said. “So this makes it incredibly difficult for neurologists and radiologist doctors to objectively say that someone has had a concussion.”

MEG scanning, on the other hand, is able to measure activity in specific brain regions and how they interact with each other, almost like mapping out cities and the roads that connect them. The technology has in the past been used to map brain activity in patients about to undergo surgery for epilepsy or brain tumours. But the researchers hope to use it to establish objective markers that can be used for diagnosing and more deeply understanding concussions.

“(MEG) records the minute tiny magnetic fields generated by the brain that serve all our thoughts feelings and behaviours,” said Dunkley. “When our brain activity generates these behaviours it’s observed by electrical currents. The machine that we use uses these incredibly sensitive magnetic sensors, which are just placed outside the head to pick up that really minute electrical activity.”

The study is also examining the effects of concussion on women specifically and the degree to which women suffer concussions more severely than men and why that is.

Ultimately, RENITA hopes to build a concussion tool that will both accurately diagnose concussions and take into account differences of biological sex in the diagnosis, the company’s co-founder, Caitlin Baltzer, explained in an email. They also hope to be able to identify when brain activity has fully recovered from a concussion and it is safe to resume playing. This could help athletes avoid more severe outcomes, including second impact syndrome, which is a swelling of the brain that can occur when a second concussion is suffered before full recovery from the first.

It was a fatal case of second impact syndrome suffered in 2013 by female high-school rugby player Rowan Stringer that spurred the passage of “Rowan’s Law” in 2018 to establish concussion protocols for amateur athletes, children and youth in Ontario.

Urban, who along with Dunkley is on RENITA’s advisory board, is hoping the result will be better tools to allow female athletes to continue with their sports even after suffering head injuries.

“The brain does recover, and if we’re basing all our recovery metrics on the male brain, then maybe we’re missing a picture and maybe that’s why we’re seeing that females have a longer recovery time or more symptoms than the male population,” she said. “And I think it’s just we need to spend the time and effort in getting that data.”