You Are Here Home Health News Scientists and health agencies warn against ivermectin for COVID-19, saying it lacks concrete evidence 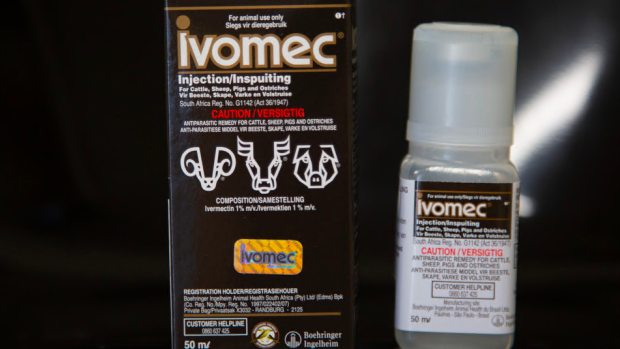 TORONTO — A drug used for livestock deworming has attracted a different herd — humans who believe it could be a cure for COVID-19, despite no concrete proof and warnings from health agencies.

Ivermectin has been around for years, used to fight parasitic infestations most commonly in large animals such as horses or cows.

But now it’s being touted by some as a way to prevent or cure COVID-19, in a wave of misinformation that has led to confusion among veterinary retailers and attempts to correct the record by health experts.

Although there is a version of ivermectin cleared for use humans, an oral pill that can be prescribed to treat parasitic infections such as head lice, scabies or “river blindness” (onchocerciasis), it has not been proven to fight COVID-19 or approved by Health Canada or the U.S. Food and Drug Association (FDA) for this purpose.

Still, in the U.S., ivermectin use has skyrocketed, with 88,000 prescriptions filled per week in mid-August.

And those who can’t get a prescription are taking the agricultural route, where a dosage meant for cows and horses — animals that weigh significantly more than humans and have completely different physiologies — creates a real possibility of poisoning.

Glenn Miller, with Anola Feed and Farm Supply told CTV News that they’ve had an increase in people inquiring after the veterinary version of the drug.

Some retailers are refusing to keep ivermectin on their shelves to prevent this.

“We are an animal feed store,” said Lance Olson, of Lone Star Tack and Feed. “We don’t cater to medications for humans. That’s not something we can even touch.”

Health Canada posted an alert on Tuesday warning the public that consuming animal health products could be seriously dangerous.

“Canadians should never consume health products intended for animals because of the potential serious health dangers posed by them,” the alert stated.

“The veterinary version of ivermectin, especially at high doses, can be dangerous for humans and may cause serious health problems such as vomiting, diarrhea, low blood pressure, allergic reactions, dizziness, seizures, coma and even death.”

According to the National Poison Data System, which aggregates data from poison control centres in the U.S., there was a 245 per cent increase in reported exposure cases to ivermectin from July to August.

A manufacturer of ivermectin, Merck, even came forward back in February to say that they have found no scientific basis for using their product to fight COVID-19.

Ivermectin is prescribed to humans with applicable parasitic conditions based on factors including weight, medical history and how they respond to treatment, making it dangerous to take a dosage level that hasn’t been prescribed.

“There is no evidence that ivermectin in either formulation is safe or effective when used for those purposes,” the statement said. “The human version of ivermectin is authorized for sale in Canada only for the treatment of parasitic worm infections in people.”

Health Canada added that it is monitoring all potential therapeutic treatments for COVID-19, and have not received any drug submissions or clinical trial applications to test ivermectin for the prevention or treatment of COVID-19.

“For drugs that have the potential to be helpful in treating COVID-19, Health Canada encourages drug manufacturers to conduct clinical trials. This would provide an opportunity for the healthcare community to collect information on the effectiveness of the treatment and its associated risks.”

SEPARATING THE MYTH FROM THE MEDICINE

Earlier in the pandemic, there was a surge of misinformation surrounding hydroxychloroquine, which was also touted as a miracle treatment for COVID-19, leading to poisonings and at least one death in those who consumed a version of the drug used in cleaning aquariums.

History seems to be repeating itself with ivermectin, the latest unproven cure to take the spotlight.

Ivermectin has been studied as a potential treatment for COVID-19 — but the results have been inconclusive or contradictory in many studies, and some studies that were seen as a positive indicator for ivermectin’s use have later been criticized for inconsistencies.

A handful of studies have found that ivermectin gives promising results to fight COVID-19 in a lab setting. Yet while this is an important first step in any drug testing, it doesn’t mean that the same results are achievable in humans.

“The concentrations used in vitro may not be achievable in therapeutic doses,” Ruben Hernandez, pharmaceutical chemist at San Borja Arriaran hospital in Santiago, Chile told AFP in January.

In a March 2021 study that looked at 400 patients, researchers found that a five-day course of ivermectin in adults with mild COVID-19 did not improve the resolution of their symptoms.

A comprehensive analysis published in the Cochrane Database of Systematic Reviews in late July 2021, which looked at 14 different studies on ivermectin and COVID-19, found that the “reliable evidence available does not support the use of ivermectin for treatment or prevention of COVID‐19.”

The review added that the existing completed studies on the topic are small, “and few are considered high quality.”

Other studies outside of this review have shown positive results only to be disputed later.

Scientists in Argentina stated in an oft-cited paper last year that ivermectin could prevent 100 per cent of COVID-19 infections.

But critics quickly found issues with the trial, from the eyebrow-raising 100 per cent statistic — something extremely rare in drug trials — to the speedy acceptance of the paper and inconsistencies in the details of the study, such as the number of participants in the study seemingly changing from table to table.

A BuzzFeed News investigation into the paper said that Hector Carvallo, the researcher who oversaw the project, would not share his data widely, even with one of the collaborators on the study, who eventually asked for his name to be removed from it.

On Aug. 26, 2021, the U.S. Centers for Disease Control and Prevention (CDC) published an advisory describing the uptick in people using ivermectin.

“Clinical trials and observational studies to evaluate the use of ivermectin to prevent and treat COVID-19 in humans have yielded insufficient evidence for the NIH COVID-19 Treatment Guidelines Panel to recommend its use,” the advisory stated.

“Data from adequately sized, well-designed, and well-conducted clinical trials are needed to provide more specific, evidence-based guidance on the role of ivermectin in the treatment of COVID-19.”

Although the drug has been approved for use with COVID-19 in some countries in Latin America, scientists worldwide have continued to caution that we simply do not have the evidence to support it.

Unfortunately, when health agencies state that they have not approved certain drugs for treatment of COVID-19, some groups don’t see this as health agencies doing their due diligence to ensure only safe and effective treatments reach the public.

Instead, they claim that evidence of the drug’s effectiveness is being deliberately hidden from the public, seeing health agencies and scientists as part of a conspiracy.

All over social media, there are groups like the Manitoba Ivermectin Alliance, which aims to promote ivermectin use with COVID-19. One thousand people have joined this particular Facebook group.

Its founder said in a letter online that “Ivermectin can stop the pandemic in its tracks. However, this information is being suppressed.”

Claims like these are concerning to public health experts.

“On one hand, you have these vaccines, which are arguably the most studied vaccines in human history, we have hundreds of millions of data points showing efficacy and really amazing safety profile,” said Timothy Caulfield, a public health policy expert. “And then on the other hand, you have an unproven therapy, and they are opting for the latter.”

Similarly, Dr. Shazma Mithansi, an ER physician in Edmonton, told CTV News, “There is no evidence to show that Ivermectin has any sort of meaningful effect on treatment or propholaxysis.