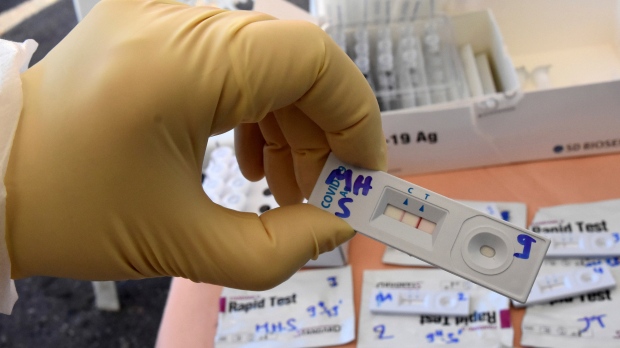 TORONTO — Cases of the new U.K. COVID-19 variant are growing rapidly, it’s more transmissible than other variants and is affecting a greater proportion of people under 20, a new study has found.

The collaborative study, published Dec. 31, 2020 by Imperial College London, examined the new variant that originated in the U.K. in late summer to early autumn in 2020, and concluded that it raises the reproduction or “r number” between 0.4 and 0.7.

The “r number” stands for the average number of people a person with the virus infects. If the numbers are above one, the epidemic is increasing.

Canada’s reproduction number remains above 1, according to the latest tracking from the Public Health Agency of Canada.

The new variant was first discovered in Canada on Dec. 26 in a couple from Ontario. Canadian health officials said they believe more cases involving the new variant are yet to be found.

The study says transmission of the new variant tripled during the November lockdown in England, but the previous iteration went down by a third.

“All viruses evolve, and very rarely a virus will change in a way that requires us to re-evaluate public health policy,” said study author Dr. Erik Volz of Imperial College London in a release.

Analysis showed that even with tighter restrictions and more closures, the variant continues to spread incredibly rapidly – but does not seem to be more deadly than its predecessor.

“Until a very high proportion of the population has been vaccinated, strong social distancing measures are needed to control this more transmissible variant of COVID-19,” Professor Axel Gandy of Imperial College London said in the release. “Everyone that can be vaccinated should be vaccinated.”

The U.K. has tightened restrictions across the board, reactivating emergency COVID-19 hospitals and closing primary schools, in an effort to slow the spread of the new variant, but 53,285 confirmed cases and 613 deaths were announced by the government Friday.

The U.K. variant has been found in the U.S., Spain, Finland, Sweden, South Korea and continues to spread, but vaccine manufacturers say their products should be effective against it.

Black scientists around the world are calling for action, equality and representation