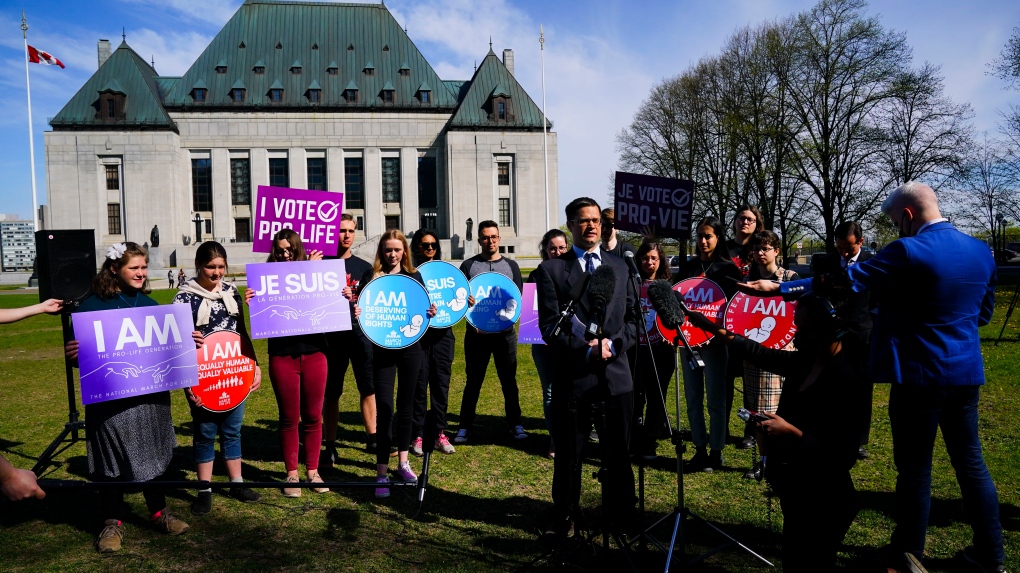 Thousands of anti-abortion demonstrators descended on Parliament Hill Thursday, as a leaked U.S. Supreme Court draft decision brings renewed attention to the issue on both sides of the border.

“How about that Roe v. Wade decision? Are you stoked? I am,” said Jeff Gunnarson, national president of anti-abortion group Campaign Life Coalition.

Gunnarson spoke to the crowd, referencing the draft decision that would overturn the landmark 1973 case in the U.S. on abortion rights.

“They’re not. They’re nervous,” he said, gesturing to the dozens of abortion rights advocates who counter-protested at the margins of the rally.

James Schadenberg said while he would have come out to the rally regardless, he hopes the leaked decision will bring encourage Canada’s politicians to bring a law to prevent abortion and “protect the right to life.”

Fellow anti-abortion protester Valerie Luetke said the situations in Canada and the U.S. are “certainly different.”

“They’re trying to strike down the Roe v. Wade abortion law in the States. But here we don’t have a law, so we’re trying to build a law. So it’s definitely different circumstances.”

Meanwhile, counter-demonstrators carried placards reading “abortion is health care” and “keep your laws off my body.”

Jaisie Walker, executive director for Planned Parenthood Ottawa, said the organization wanted to make sure its presence was extra powerful this year.

“Our goal for the day is to build solidarity amongst the folks who come here today,” said Walker, adding the group was there to share information and “support reproductive justice.”

Attendees in religious attire were present at the March for Life rally and many speakers made references to Christianity.

“Life is very important. It’s a gift from God, the life we have,” said Gaetana Nicola, who said she has been coming to the annual rally for a long time.

The Liberals promised last fall to bring in new regulations solidifying abortion access as a requirement for federal funding under the Canada Health Act, but Prime Minister Justin Trudeau last week raised the spectre of enshrining abortion rights in legislation instead. That could make it more difficult for future governments to make adjustments.

Asked Thursday what factors are being weighed in considering whether to legislate, Trudeau said the most important one is that “every woman in Canada should have a full access to legal, safe abortion services, and reproductive health services wherever she is in the country.”

He said the government also wants to assure that gains are not rolled back by future governments or court decisions, and discussions are taking place on the best way to do that.

The subject of abortion was broached during the Conservative leadership debate on Wednesday, where every candidate except recently elected Ontario MP Leslyn Lewis said they either supported the right to choose an abortion or would not introduce legislation on abortion as prime minister.

Longtime MP Pierre Poilievre stated that a government led by him wouldn’t pass or introduce legislation restricting access to abortion.

Poilievre later said he believes in freedom of choice and would allow free votes from his caucus. He also laid into Charest’s own record, noting that the former Progressive Conservative MP voted for a law that would have recriminalized abortion in 1990.

“Whoever the new leader is, the issue is going to come up in the election,” said Scott Hayward, co-founder of RightNow, a organization that works to elect anti-abortion candidates.

“Whether they want to talk about inflation the whole time or not, it’s gonna come up and they have to have an answer.”

Lewis is the only one who takes it on and “doesn’t look like you’re trying to hide from something,” Hayward added.

Ottawa police advised those travelling downtown Thursday to expect traffic disruptions, and notify they would carry out rolling road closures ahead of the demonstration.

Vehicles are still not allowed on Wellington Street between Bank Street and Elgin Street, after the “Freedom Convoy” protest that gridlocked downtown Ottawa for several weeks in February.

This report by The Canadian Press was first published May 12, 2022.

This story was produced with the financial assistance of the Meta and Canadian Press News Fellowship..

‘March for Life’ is underway on the Hill. In addition to counter protesters across the street, a large contingent of pro-choice demonstrators have gone up on to one side of the lawn, speeches beginning with a backdrop of opposing chants. pic.twitter.com/LYSQEGZNOP

Up on the Hill, Conservative MPs are speaking to the March for Life anti-abortion crowd, while chants of ‘my body, my choice’ echo from the other side of the lawn. The rally is set to soon start moving through the streets. #cdnpoli #ottcity pic.twitter.com/fqPpeRAIOn