You Are Here Home Health News What is the difference between mRNA and viral vector-based vaccines? 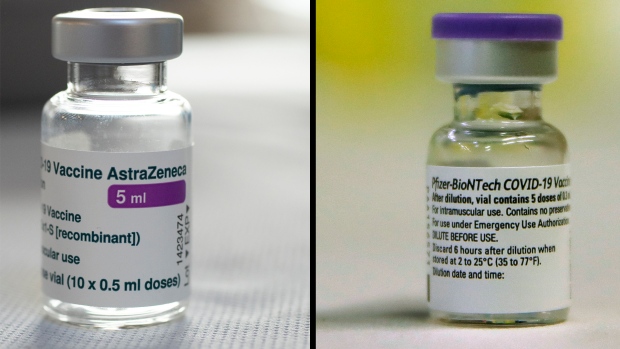 TORONTO — After the National Advisory Committee on Immunization recently doubled down on its recommendation that mRNA vaccines are “preferred” over their viral vector-based counterparts in the fight against COVID-19, questions have been raised about the vaccines’ differences.

So far, Health Canada has currently authorized the use of four different COVID-19 vaccines made by Pfizer-BioNTech, Moderna, AstraZeneca, and Janssen (Johnson & Johnson’s vaccine division).

The Pfizer-BioNTech and Moderna vaccines use mRNA technology while the AstraZeneca and single-dose J&J shots are considered viral vector-based vaccines.

So what is the difference between mRNA and viral vector-based vaccines and why is NACI recommending one type over the other?

WHAT ARE VIRAL VECTOR-BASED VACCINES?

Viral vector-based vaccines, such as those developed by AstraZeneca and Johnson & Johnson, use a harmless virus, or adenovirus, as a delivery system to trigger the immune system to create antibodies to fight off an infection by SARS-CoV-2, which is the virus that causes COVID-19.

The adenovirus is not SARS-CoV-2 itself, but rather a different, harmless virus that has been manipulated so it’s unable to replicate and cause illness.

Adenoviruses are viruses that cause the common cold and there are many different types, which have been used for decades to deliver instructions for proteins, Health Canada explains on its website.

In the case of COVID-19, the vector virus delivers specific genetic instructions to the cells in the body to produce a harmless piece of SARS-CoV-2 called the spike protein. The cells then display this spike protein and the immune system triggers a response.

The viral vector-based vaccines are genetically modified so they’re unable to replicate, which means once the antibodies are created, the viral vector is cleared for good.

According to the U.S. Centers for Disease Control and Prevention (CDC), the benefit of viral vector-based vaccines is that they provide protection against SARS-CoV-2 without ever having to risk the serious consequences of getting sick with COVID-19.

The CDC also stressed that these types of vaccines cannot cause an infection of COVID-19 or with the adenovirus being used as a vaccine vector.

WHAT ARE mRNA VACCINES?

For their COVID-19 vaccines, Pfizer-BioNTech and Moderna use a novel technology that has never been approved for widespread use before the pandemic.

This technology uses messenger ribonucleic acid (mRNA), which is a molecule that provides cells with genetic instructions for making proteins that are needed for numerous cellular functions in the body, including for energy and immune defence.

In a lab, scientists develop synthetic mRNA that is able to instruct the body’s cells to develop that same distinctive spike protein from the SARS-CoV-2 virus that the viral vector-based vaccines also target.

After the piece of protein is made, the cell breaks down the genetic instructions and gets rid of them. Both Health Canada and the CDC stressed that the mRNA never enters the central part of the cell where a person’s DNA material is located, which means the vaccine does not affect or interact with DNA in any way.

Like with the viral vector-based vaccines, the immune system identifies the foreign spike proteins produced by the cells and initiates an immune response by building antibodies against them. If the immune system faces the real SARS-CoV-2 virus, it will be ready to fight it off.

While there are similarities in how both mRNA and viral vector-based vaccines instruct cells to create the SARS-CoV-2 spike protein, mRNA vaccines differ in that they don’t contain any live virus.

IS ONE TYPE OF VACCINE BETTER?

The viral vector-based COVID-19 vaccines developed by AstraZeneca and Johnson & Johnson have been linked to an extremely rare and potentially life-threatening blood-clotting syndrome called vaccine-induced thrombotic thrombocytopenia (VITT) – which is the combination of low platelet counts with blood clots.

The risk for developing this syndrome is estimated to be anywhere from one case in 100,000 doses to one case in 250,000.

In Canada, there have been only seven reported VITT cases in all of the approximately 1.7 million doses of AstraZeneca that have been administered in the country so far.

Due to the extremely low risk of developing VITT after vaccination with a viral vector-based vaccine, however, NACI recently reaffirmed that the mRNA vaccines are “preferred” over the other ones and that it might be in the best interest of some Canadians who have a low risk of exposure to COVID-19 to wait for an mRNA dose.

Despite this guidance, both Health Canada and NACI have emphasized that the vaccines by AstraZeneca and Johnson & Johnson are safe and effective for the majority of the population and there could be far worse consequences of contracting COVID-19.