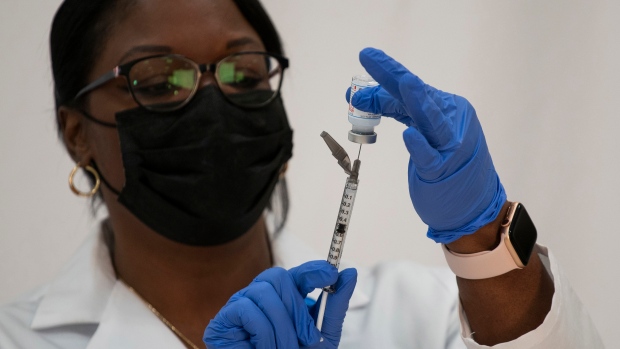 Canada announced approval of the Moderna vaccine on Wednesday, two weeks after authorizing a vaccine from Pfizer-BioNTech.

The country began rolling out its vaccination program on Dec. 14 when Pfizer inoculations arrived in Toronto, Montreal and Quebec City. The rollout of the Moderna vaccine is expected to happen in the coming days.

Here’s a look at what we know about Moderna’s vaccine and how it compares with Pfizer’s.

HOW DOES IT WORK?

Moderna’s vaccine, like Pfizer’s, uses messenger RNA (mRNA), a novel technology that essentially teaches our cells how to produce the coronavirus’s spike protein. That triggers an immune response if we become infected with the virus in the future.

The vaccine uses a synthetically-produced mRNA that’s packaged in a fat coating. When injected into the arm muscle, the mRNA is dumped into the cell. It’s then translated into protein to make the antibody.

Moderna’s vaccine, like Pfizer’s requires two doses, with the second dose administered roughly a month after the first.

HOW EFFECTIVE WAS IT IN CLINICAL TRIALS?

The U.S.-based Food and Drug Administration said earlier this month that Moderna’s vaccine is 94 percent effective at preventing symptomatic illness, and it appears to prevent the spread of the virus as well.

Vaccines typically prevent against illness, not infection, which means people could theoretically still carry the virus even if they were inoculated against it. Since SARS-CoV-2 can be spread by those without symptoms, having a vaccine that also prevents transmission is important.

The 94 per cent effectiveness was observed after people received two doses of the vaccine about 28 days apart, but the FDA also released documents recently that said there is evidence that just one dose may stop the virus’s spread.

The FDA says asymptomatic infection was reduced by 63 per cent after the first shot.

HOW IS IT STORED?

The Moderna vaccine requires storage at a more ideal temperature than Pfizer’s — about -20 C, or the temperature of a regular freezer. Pfizer’s vaccine needs ultra-cold freezers to be kept at -70 C.

The warmer temperature of Moderna’s makes storing and shipping the product more manageable, which could help in getting the vaccine to more remote areas of the country.

HOW QUICKLY CAN ROLLOUT BEGIN IN CANADA?

Moderna intends to start shipping its vaccine to Canada within 48 hours of approval, with as many as 168,000 doses anticipated before the end of December and two million by the end of March.

WHAT ARE THE SIDE EFFECTS?

Moderna reported similar side effects to Pfizer’s vaccine — things like soreness at the injection site, fatigue, headache, and muscle pain.

Health Canada says those side effects are common to most vaccines.

WHAT QUESTIONS ARE YET TO BE ANSWERED?

Like Pfizer’s vaccine, we still don’t know how long immunity lasts with Moderna, and whether booster shots will be required down the road.

We also don’t know how long a vaccination rollout will take in Canada, and how many Canadians will need to be inoculated before we reach herd immunity from the virus. The government has said it hopes to vaccinate the majority of Canadians by fall 2021.

This report by The Canadian Press was first published Dec. 23, 2020.