You Are Here Home Health News What we know about the U.K.’s new novel coronavirus variant 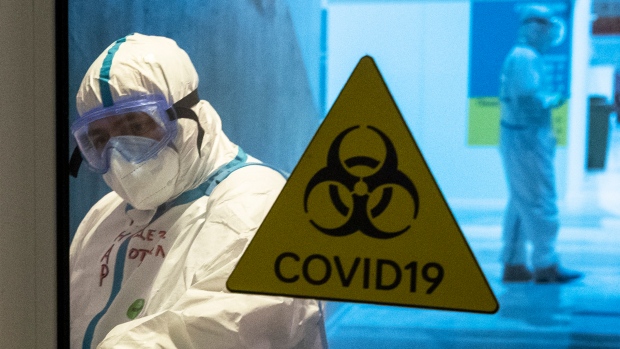 TORONTO — Lockdowns have been initiated in the United Kingdom, as several European Union countries cancel flights after information was revealed about a new variant of the virus that causes COVID-19.

In a tweet, Health Minister Patty Hajdu said Sunday afternoon that she, Prime Minister Justin Trudeau and members of the federal government’s Incident Response Group would be meeting to “discuss the genetic variant of the virus that causes COVID-19.”

On Sunday, Global Affairs Canada updated its “Entry/Exit requirements for the United Kingdom“, advising Canadian travellers to be aware of national and local lockdown measures being implemented across the U.K.

“Following the identification of a new variant of the virus, international travel from certain areas in the U.K. may be increasingly restricted because of domestic regulations,” the post read, referring to the tougher rules U.K. Prime Minister Boris Johnson implemented Sunday. “Local authorities may impose additional requirements without notice and your travel plans could be severely disrupted. You should not depend on the Government of Canada for assistance related to changes to your travel plans.

Earlier today, British Health Secretary Matt Hancock said the new variant, which had been announced by Public Health England last week, was now “out of control” but not more dangerous, adding that lockdown measures were being imposed to get it clamped down.

Johnson told reporters this new variant is more than 70 per cent more transmissible. But he stressed, “There’s no evidence to suggest it is more lethal or causes more severe illness.”

“At the moment, it’s really being flagged as one (variant) which is a very strong candidate for changing the transmission of the virus,” Lucy van Dorp, senior research fellow in microbial genomics working at UCL Genetics Institute, told CTVNews.ca on Sunday.

Johnson explained the variant was likely the cause of an uptick of new cases in London and southern England.

Van Dorp explained that although preliminary evidence, such as from the European Centre for Disease Prevention and Control, points at its increased transmissibility, she’s cautioning people to wait for more analysis and peer-reviewed studies.

MUTATIONS ARE NORMAL FOR VIRUSES

For the past year, scientists have seen thousands of naturally-occurring mutations in samples of the novel coronavirus.

But none have led to worsening symptoms or affected how quickly the virus spreads — until this latest mutation.

Van Dorp mentioned findings, on what’s been dubbed the “U.K. variant,” are preliminary, with studies likely underway to better understand how much faster it allows the virus to spread, antibody responses and any affect it will have on COVID-19 vaccines.

St. John, along with van Dorp, said they are waiting for even more information and analysis to be conducted in the coming weeks.

Infectious diseass specialist Dr. Ian Brasg of Humber River Hospital told CTV News Channel he’s “definitely waiting to hear more about it” and that “we really need to do our due diligence and find out what exactly is happening.”

Brasg added “it’s quite natural for virus to mutate and develop variants, many of which pose no greater risk than the original virus.”

WHAT MAKES IT MORE TRANSMISSIBLE?

Although data is fairly scant so far, this new virus variant involves mutations in the DNA sequence that encodes its “spike” protein, according to Public Health England.

This protein is how the virus binds and infects cells, van Dorp explained. She said mutations to the protein’s DNA code are fairly important.

Van Dorp said the “high number” of mutations is being analyzed more because this protein is also what researchers have been targeting for vaccines and antibody-based therapies.

Previous studies have flagged mutations in this part of the DNA sequence as “biologically relevant” she said.

“We also see that this variant is fairly unrelated to other viruses in circulation, so it seems to have adapted in some way that’s really worth following up on.”

When it came to the uptick in new cases and this new variant, Saxinger said “I think this serves to warn us about making sure that we suppress the virus spread as we’re waiting for the vaccine rollout.”

WILL IT AFFECT VACCINES?

There was “no current evidence to suggest the new strain causes a higher mortality rate or that it affects vaccines and treatments although urgent work is underway to confirm this,” the chief medical officer for England, Prof. Chris Whitty, said in a statement Saturday.

Johnson also said that there’s no evidence that currently available vaccines will be less effective against it.

“But the expectation is that vaccines stimulate a broad antibody response. So they (the vaccines) are triggering a response to the entire spike protein, so if we have mutations in some regions (of the DNA), it doesn’t seem like that would reduce the efficacy of the vaccine in a particularly significant way.”

But she stressed changes to vaccine efficacy “wasn’t completely implausible.”

Out of an abundance of caution, several countries have cancelled flight from the U.K.

The Netherlands and Belgium have imposed a ban on flights. The Dutch government said the ban will last for at least the rest of the year, while Belgian officials issued a 24-hour flight ban and halted train links to the U.K.

France and Ireland will both impose a 48-hour ban on flights arriving from the U.K. Italy and Austria also joined the travel ban but the former didn’t specify how long the ban would last. Austria gave no immediate details on the timing of the ban, news agency APA reported.

In a tweet, Germany’s minister of health Jens Spahn, said the country is also set to restrict all travel to the U.K. and South Africa because of the new strain.

This afternoon, @JustinTrudeau and I are meeting with our colleagues and officials from the Incident Response Group to discuss the genetic variant of the virus that causes COVID-19 identified in the United Kingdom.

It’s unclear if Canada will be taking similar steps. CTVNews.ca has reached out to Global Affairs Canada for comment.

On Saturday, the World Health Organization said they would be updating member states and the public as news becomes available and that it was in “close contact with U.K. officials on the new #COVID19 virus variant. They’ll continue to share info & results of their analysis & ongoing studies.”

In the meantime, we continue to advise people to take all protective measures to prevent the spread of the #COVID19 virus and comply with national authorities’ guidance. https://t.co/CTdAEJ8Pqn