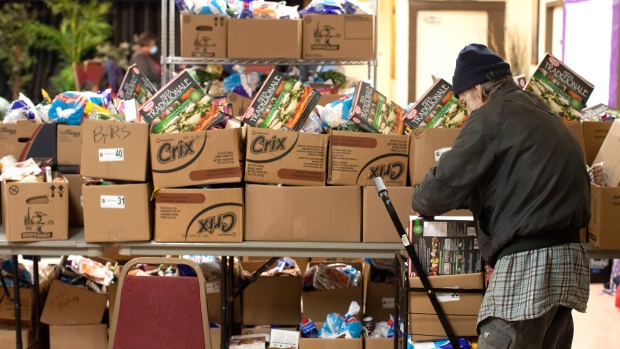 A new report looking at Ontario data across a six-year period has found that the factors that drive up food bank visits the most are increases in rent and changes to disability benefits, helping to outline how concrete policy changes could help those living on the edge.

A Wednesday press release explained that when researchers’ findings are extrapolated to the future, there would be an additional 73,776 more visits every year to food banks in Toronto if rent went up by just $30 per month.

“The biggest message I’d like people to take away from this is food banks are part of the social safety net, and that when you see people using food banks more and more and more, it’s a signal that there’s something wrong with your income support programs,” Ron Kneebone, professor of economics at the University of Calgary and one of the study authors, told CTVNews.ca in a phone interview.

Kneebone explained that while previous studies examined what causes food insecurity in general, there haven’t been many that focus on what affects the frequency of visits to food banks specifically, because food bank data is not publicly collected.

Researchers with the University of Calgary School of Public Policy looked at data provided by the Daily Bread Food Bank in Toronto between January 2014 and March 2020, during which there was a 53-per-cent increase in visits to food banks.

Researchers tracked the number of monthly visits to the food bank and then compared that increase to various factors that would have affected residents’ finances.

Kneebone explained that when people think of the social safety net, they tend to only think about social assistance programs such as welfare offered directly by the government.

“Food banks are privately funded here, they rely on people’s donations, and it’s got nothing to do with governments,” he said. “What we try to show in the paper is that what government does impacts food banks and the reason for that is because people who use food banks are people with very restricted incomes. They’re hanging on, and it does not take much to push them over the edge.”

Researchers looked at market rent across the study period in Toronto, focusing on one-bedroom apartments since two-thirds of those who use food banks are either single or single parents, according to their data. When rent prices were mapped beside food bank visits, there was a general upward trend for both.

Kneebone said that what this shows is that we either have to ensure that incomes keep pace and increase as rent keeps increasing, or we have to invest more into rent support programs to help those with lower incomes.

Rent support programs such as housing where the price is a specific percentage of a person’s income instead of a fixed price they can’t afford could go a long way in keeping people from needing to rely on food banks, he added.

“You don’t go to a food bank as the first option,” he said. “You’re trying to rescue yourself. You’re turning down the heat, you’re skipping meals, et cetera and then you’re forced into a food bank.”

Minimum wage also seemed to be connected to the frequency of food bank visits, researchers found.

“The large increase in the minimum wage introduced in January 2018 interrupts what appears to be a generally negative correlation between the real minimum wage and food bank visits,” the study stated.

There was one factor that was most closely correlated with an increase in food bank visits.

“The most important thing that drives people into food bank use in Toronto was declining purchasing power of disability incomes,” Kneebone said.

Researchers mapped the food bank increases beside changes in how much income support was available each year for a single person to receive from either Ontario Works (OW) benefits or the Ontario Disability Support Program (ODSP).

The report noted that 60 per cent of those who access food banks in the Toronto region have income supports as their main source of income, with half receiving benefits through OW and half receiving them through ODSP.

It was the disability benefits specifically that were most closely associated with increased in food bank visits: as food bank visits increased between 2014 and 2020, the amount of assistance available to a single person through ODSP ticked steadily downwards.

“Whenever a government does something to tighten up or squeeze the social assistance programs, it impacts food banks,” Kneebone said.

Government inaction can also have the same impact, as often social assistance programs don’t keep up with inflation, he pointed out.

Kneebone said that disability benefit programs vary widely by province in Canada, noting that in Alberta, his home province, the program is more generous than Ontario’s. However, he added that “in general, the level of income support to people dealing with disabilities is pretty low.”

One of the big problems facing Canadians with disabilities is that their overall expenses are higher than the rest of the populace on average, Kneebone explained, giving the example of how a person in a wheelchair will have much more trouble than he would in finding an apartment that is accessible to them.

“Measures of poverty that governments like to use underestimate the real poverty line for people with a disability,” he said. “For them, the income you need to stay out of poverty is much higher than it is for someone who is not dealing with a disability.”

The study results showcase how government policies can have a direct impact on those who are living precariously on the poverty line.

“When the purchasing power of social assistance and minimum wages go down, food bank use goes up, when people have trouble finding employment, food bank use goes up —all that’s obvious to me,” Kneebone said. “And the other thing that’s important from that then is that there are solutions to this and the obvious solution from a government policy point of view is to increase the incomes of people relying on social systems.”

Food banks are meant to help in case of an emergency. But when we see food bank business increasing, it’s the proverbial canary in a coal mine, he explained.

“When the canary dies, or when food bank business goes up, it’s telling you that your social supports are not generous enough and you need to be thinking about how I could change them to keep people from relying on food banks,” Kneebone said.

Neil Hetherington, CEO of Daily Bread Food Bank, said in a news release that the study shows how governments have the ability to “put food banks out of business” if they focused on policies to address rent and disability benefits.

“A failure to prioritize these will sadly drive more people to our doors because they have nowhere else to turn when their income cannot cover the cost of living,” he said.

The study was limited in that it only looked at data from a Toronto-based food bank, but the warnings this study comes with are ones that it would be wise to heed across the country, Kneebone said.

“I’d be willing to bet money that, in fact, food bank visits are going up across Canada,” he added. “And the reason for that is that incomes are not keeping up with inflation and in particular rents are increasing very quickly.”