You Are Here Home Health News When might the wait time between shots of two-dose COVID-19 vaccines be reduced? 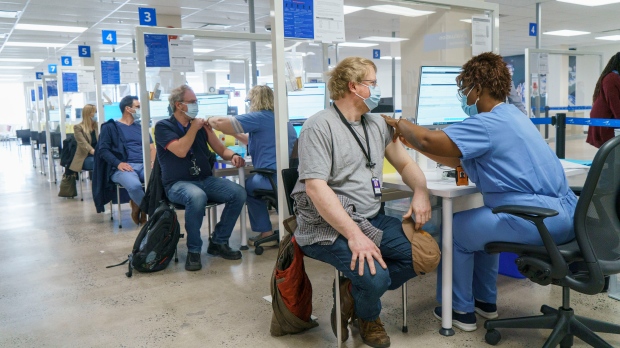 OTTAWA — Jurisdictions across the country have been following a national vaccine panel’s recommendation to prolong the time between the first and second doses of two-shot COVID-19 vaccines to up to four months. However, with Canada’s vaccine supply set to increase, will provinces start to shorten the interval between shots?

CTVNews.ca looked into several provinces’ current policies and whether some have plans to change their approach anytime soon, and where things stand when it comes to Canada’s uncommonly long COVID-19 vaccine dosing intervals.

The National Advisory Committee on Immunization (NACI)—an arm’s-length volunteer advisory panel of medical experts that makes recommendations on the use of vaccines—recommended March 3 to put off second shots in order to make COVID-19 protection as widespread as possible with the limited doses Canada had, despite it being against the manufacturers’ advice.

In a follow-up press conference on April 7— on what infectious disease specialist Dr. Isaac Bogoch has called the “first dose fast” strategy—NACI vice-chair Dr. Shelley Deeks said that while initial efficacy data indicated scheduling second shots up to 16 weeks after the first was a viable option, the time people will have to wait in reality is “expected to be less.”

NACI estimated at the time that with an increase in supply over the coming months, the interval between shots would likely be closer to the manufacturer-suggested intervals, with second doses being scheduled for 1.5 or two months after the first.

The federal government has promised to have 44 million doses delivered by the end of June.

With this commitment made, several provinces have announced intentions to make first shots available to all eligible adults by the end of June. On Thursday, both Ontario and Quebec announced they’ll open up bookings to anyone aged 18 and older in May.

In Ontario at least, this move isn’t changing the province’s approach to second doses yet, but it could if another increase in shipments is announced by the federal government, according to Solicitor General Sylvia Jones.

“If and when we have sufficient supply, we will be looking at moving closer together the first and second dose, but it’s really important that we get first doses into as many people who are interested and willing to take it,” she said.

NACI has said that second doses should still be offered as soon as possible, prioritizing those at highest risk. One province heeding this aspect of NACI’s guidance is Alberta.

That province is allowing long-term care residents, those in designated supportive living, and Albertans who are undergoing specific kinds of cancer treatments or taking medications that makes them more immunocompromised to book their second dose 21 to 28 days after their first.

While some provinces, including Nova Scotia, indicated no active consideration of shortening the time between doses anytime soon, it is something Manitoba is currently discussing.

“We’re on the cusp of finalizing the full aspects of our second dose plans, we hope to release that fairly soon, as soon as next week. But what I can say about the second dose is: By the time that rolls around, we will be in a scenario of high vaccine supply into the province,” said Manitoba Vaccine Implementation Task Force Co-Lead Johanu Botha during a briefing on April 28.

“The four months is a medical recommendation in terms of how long we can extend the second dose, it’s not an operational one. We will not be waiting that long before everyone has had their second dose for those who would like it.”

In Ontario, Bogoch, who is also a member of the province’s COVID-19 Vaccine Distribution Task Force, shared a similar sentiment.

“I think it’s fair to say that we probably won’t be waiting four months for our second dose. The keyword is probably,” Bogoch said in a recent interview with CTV News.

The longer wait between shots is advice that is in contrast with the timelines included in Health Canada’s authorization of these vaccines, which match the pharmaceutical companies’ guidance for shorter intervals.

For example, Pfizer recommends its second dose after 21 days; Moderna recommends a 28-day interval, and AstraZeneca has suggested administering its second shot between four and 12 weeks after the first.

As the regulator, Health Canada is responsible for authorizing each vaccine for use in Canada, whereas NACI’s job is to make suggestions on how the vaccines are used.

In a March statement, Pfizer recognized that some countries have expanded their dosing intervals, but the pharmaceutical giant says it had not evaluated the safety and efficacy of different dosing schedules.

This disconnect has prompted concerns among some over whether Canada has entered “unchartered territory” as Conservative Leader Erin O’Toole recently put it, as the only country practising an up to four-month delay between doses.

Despite these concerns, as more real-world and clinical data is issued, it appears that the COVID-19 vaccines Canada is using offer strong levels of immunity after a single dose.

WHAT THE DATA SHOWS

While not all provinces are doing their own research into the efficacy of extending the dose intervals, in British Columbia, according to the provincial health ministry, the vaccine effectiveness after a single dose in residents of long-term care homes and health workers has shown to be “more than 80 per cent within two to three weeks of immunization.”

“We are learning that we can extend the second dose to at least 16 weeks and still have this high level of protection, in fact, extending this interval might provide more durable and longer lasting protection in the long run,” said B.C. Ministry of Health spokesperson Marielle Tounsi in a statement.

New data released on April 28 by the U.S. Centers for Disease Control and Prevention (CDC) indicates that, between January and March, the mRNA Pfizer and Moderna vaccines were 64 per cent effective against COVID-19 hospitalization after one shot.

“If you look at very carefully at the data that was given from the phase three trials, you can see that about 14 days after the first doses, you can really start to see the ramping up of protection,” said Canadian Institutes of Health Research Scientific Director Dr. Charu Kaushic in a recent interview with CTV News.

While experts say that the degree of efficacy after one dose isn’t enough that Canadians should be letting their guards down after their first shot, Kaushic said that in the long run, opting for the wide-spread push to vaccinate a large swath of the population faster should help lower overall spread of COVID-19.

She said this is what’s seen to be happening in the United Kingdom, which also extended dose intervals, offering its citizens shots three months apart.

Amid data from some provincial health agencies and anecdotal reports from doctors who are treating COVID-19 patients, that people are still ending up seriously sick with COVID-19 after their first shot, there are calls from those on the front line and from academics for political and public health leaders to be clearer in their messaging about what protection people have while they wait to become fully vaccinated.

“It’s going to be incredibly important for people to understand what are the things that they can do safely, once they’ve had one or two doses of the vaccine. The other upcoming challenge that we already need to be thinking about, is making sure that people who’ve had their first dose, actually return for the second,” said University of British Columbia health communications professor Heidi Tworek, in a recent interview with CTV News.

A recently tabled response from the Public Health Agency of Canada (PHAC) seeks to shed a bit more light on where NACI currently stands on its suggestion to delay second doses.

Responding to a question from Conservative MP and health critic Michelle Rempel Garner asking about what scientific evidence was used, and what deliberations went into making the recommendation, PHAC said NACI relied on peer-reviewed and pre-print studies as well as population data from Canada and abroad. It also factored in the historical experience with two-dose vaccines and immunology principles when deliberating over the decision for three meetings before voting to issue the recommendation.

“Experience with other multi-dose vaccines after a single dose suggests persistent protection could last for six months or longer in adolescents and adults. Longer-term follow-up of clinical trial participants and those who are vaccinated through public programs will help determine the duration of protection following both one and two doses of COVID-19 vaccines,” read PHAC’s response in part.

The agency also said that in some Canadian jurisdictions, weekly data is being collected to monitor the effectiveness of the extended interval and should the supply, epidemiological, or efficacy situation shift, NACI would consider changing its guidance.

As has started to be seen with other pieces of NACI guidance — including most recently on the eligibility age for the AstraZeneca vaccine — provinces can opt to take a different approach at any time, regardless of this volunteer body’s position.

All this considered, at this point in the rollout, it doesn’t look like there’s much movement towards reducing the up to four month wait, but that doesn’t mean it won’t happen.

Provinces pausing second doses until everyone who wants to be inoculated has their first, could change around Canada Day.

If provinces stick to prioritizing first shots through until the end of June, then by July the mass vaccination effort should be focus on getting second shots into arms—save for the Canadians who start receiving the single-shot Johnson & Johnson COVID-19 vaccine.

Given the federal plan to have every eligible adult fully vaccinated by the end of September, for individuals only receiving their first shot of a two-dose vaccine in June, the wait time between their first and second doses should start to become shorter.

“Should we manage to vaccinate a lot of people you know, in the next month or two months, and there’s enough vaccines available, I’m sure we can go back to try to get more people their second shots,” said Kaushic. “People are being given, you know, dates which are now into August, but it doesn’t mean that you may not be able to get the second dose earlier.”

According to CTV News’ vaccine tracker, nearly 12 million people in Canada have received their first shots, and approximately one million Canadians—many of whom would have began their COVID-19 vaccine regimes over the winter months in advance of this strategy change—are now fully vaccinated.