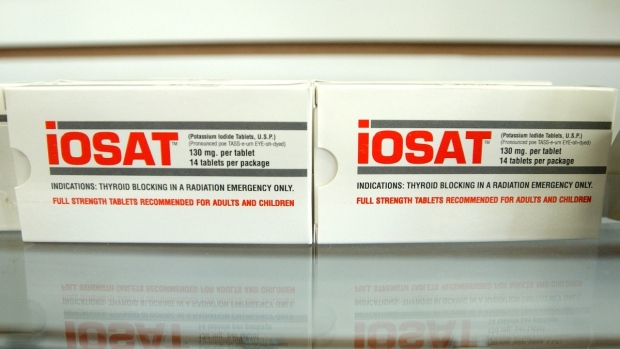 As Russia’s assault in Ukraine intensifies, fear of radioactive fallout from accidental or intentional attacks on Ukraine’s nuclear plants, or from the use of a nuclear bomb, has triggered surging demand for potassium iodide pills.

In such an event, there’s the frightening risk of large amounts of radioactive iodine (or radioiodine) being released into the atmosphere which can be breathed into lungs as well as contaminate water, soil, plants and animals, according to the Centers for Disease Control and Prevention.

Although potassium iodide itself isn’t harmful and is an important chemical that’s needed by the human body, the CDC says radioactive iodide can harm the thyroid, a butterfly-shaped gland in the front of the neck that produces many of the hormones that regulate the body.

The danger is that if radiation exposure occurs, the thyroid gland can’t distinguish between regular iodine and radioiodine and will absorb both. Too much exposure can lead to thyroid cancer.

When used as directed, potassium iodide in liquid or pill form can quickly saturate the thyroid gland and prevent it from absorbing radioactive iodine.

Large manufacturers of potassium iodide approved for sale in the United Sates have seen their inventories rapidly depleted in recent weeks, coinciding with Russia’s invasion of Ukraine.

As supplies in the market dry up, price gouging has set in.

On eBay, four boxes of Thyrosafe potassium iodide tablets were listed for US$132.50 on Monday. Another listing for a box of IOSAT 130 mg pills was selling for $89.95 each. The 14-pack box of the IOSAT tablets, made by Anbex, sell for $13.99 on the manufacturer’s website.

It’s also important to know that potassium iodide pills aren’t a cure-all and don’t offer 100% protection against radioactive iodine. The CDC warns that a single dose protects the thyroid gland for just 24 hours.

The agency said taking a higher dose, or taking it more often than recommended, does not offer more protection and can cause severe illness or death.

The CDC also cautions that potassium iodide pills only protect the thyroid and work best for certain age groups.

“We hope to be back in stock in early April but we’re pushing for late March,” said Troy Jones, vice president of sales and marketing for Anbex. Jones also runs a website www.nukepills.com that sells Anbex’s potassium iodide pills.

Jones said the company saw a rush of orders beginning in mid February of up to 15 million tablets from a variety of buyers, including individuals, resellers, hospitals, municipalities and governments worldwide.

“The big run started on February 23 through February 28. We sold out of all the inventory we had,” Jones said. Although supplies are being replenished weekly, they’re selling out just as fast. “In the past five days we’ve probably sold as much as what typically would take us half a year to sell,” he added.

Demand soared when former U.S. President Donald Trump tweeted in 2018 that he had a “much bigger & more powerful” button than North Korea’s Kim Jong-un, igniting fear about an escalating threat of nuclear war. It also happened in the same year when the Hawaii Emergency Management Agency sent out a false ballistic missile alert.

And just last month, Russian president Vladimir Putin said he had ordered his country’s deterrence forces — which include nuclear arms — to be at their highest state of alert. The White House responded to the move, calling it part of a wider pattern of unprovoked escalations and “manufactured threats” from the Kremlin.

The escalating rhetoric from Russia only helped fuel anxiety — and the purchase of potassium iodide, manufacturers said.

Anbex, which sells its tablets in a 14- day or 20-day foil-sealed pack depending on the dosage, has ramped up production, said Jones.

He said consumers should follow the CDC’s guidelines and only take potassium iodide pills on the advice of health officials.

“This has coincided with the conflict in Ukraine,” said Chris Sampson, spokesperson for London-based BTG, which also has US operations. BTG makes Thyrosafe, an FDA-appoved 65 mg over-the-counter potassium iodide tablet. A box of 20 tablets is priced at $12.95 on the company’s website.

Sampson said BTG has not been entirely out of stock, “though we have temporarily stopped accepting orders through our own website and some of our partners/distributors have been out of stock.”

“Most of our product is sold to governments, public health agencies and the military who manage stockpiles,” he said. “All of those orders are being met.”

The White House could not immediately be reached for comment on this story.

Do you have both Ukrainian and Russian family members? How are you handling the crisis? Email dotcom@bellmedia.ca.