You Are Here Home Health News With mask mandates easing, experts say choosing to wear one may be seen as making a statement 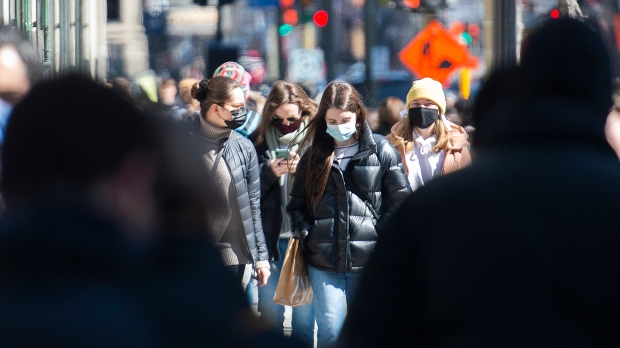 As provinces remove mask mandates across much of the country, experts say choosing to wear a face covering could be seen as a political statement, with the responsibility to protect Canadians against COVID-19 shifting to individual responsibility rather than a collective effort guided by public health measures.

Kerry Bowman, a bioethicist and assistant professor at the University of Toronto’s faculty of medicine, told CTVNews.ca that the ethics behind mask wearing have “really shifted” with the lifting of mandates.

Bowman said in a telephone interview Thursday this could lead to increased tensions between individual Canadians, as well as the general public and governments.

“It’s now on individuals’ shoulders in terms of your own interpretation to the safety of you and your family,” he added.

Bowman said there will likely be many Canadians who choose to continue to wear a mask, not only out of safety concerns, but also out of “anger and frustration” for how “radicalized” the topic had become over the course of the pandemic.

Bowman noted that COVID-19 and its subsequent restrictions have “divided” Canadians, and he said he worries choosing to wear a mask may become a choice related to one’s ideology and political beliefs, rather than a decision rooted in the science of public health.

At the start of the pandemic, the decision to wear a face mask quickly became a political issue in the United States, forcing citizens to pick sides in a culture war over how best to contain the virus.

With experts and political figures divided, masking in America visually pitted those willing to follow health officials’ guidance against those who think it violates their freedom.

Inconclusive science and shifting guidance early on added to the political debate, Bowman said, as health officials initially said wearing a mask was unnecessary, but later changed tune to use face coverings to help prevent transmission of the virus as more data became available.

While Bowman is for the lifting of mask mandates “soon,” he said the move could reignite hostility between those for and against the decision that was seen earlier in the pandemic. However, he noted that keeping masks as a public requirement could also lead to greater feelings of anger for some.

Canada’s top public health officials have said that continuing to wear a mask amid restrictions easing in many provinces is a “personal choice.”

Deputy chief public health officer Dr. Howard Njoo said during a Public Health Agency of Canada (PHAC) press conference on Friday that while “clearly mask-wearing is a well-tested, tried and true personal protective practice,” it is not a mandatory requirement across the country and is “a personal choice under one’s individual risk assessment.”

Ontario plans to remove its mask mandate at the end of March, while provinces like Saskatchewan and Alberta have already done away with mandatory masking. Quebec said it will ease its masking requirements beginning in April.

PHAC’s website states that even if masks are no longer mandatory by local or provincial public health advice, wearing a mask is important and provides “an added layer of protection.”

“Whether you’re vaccinated or not, you should consider wearing one in shared spaces with people from outside of your immediate household. This is especially important indoors, whether in private or public settings,” PHAC says on the website. “Masks are strongly recommended in any crowded setting, including settings with vaccination requirements.”

Dr. Anna Banerji, an infectious disease expert and the director of global and Indigenous health at the University of Toronto, told CTVNews.ca that the decision to continue wearing a face mask will depend on each person’s “perception of risk.”

As Canadians choose whether to keeping wearing masks, Banerji said it is important to keep in mind that we don’t know one another’s personal risk factors.

“If that person has cancer or has leukemia or has an elderly partner, we don’t know. Even if someone doesn’t have those risk factors, it’s about people’s feelings of feeling safe,” she said. “If there are high rates of COVID and someone is feeling safer with a mask, then they should be entitled to use that.”

PANDEMIC IS NOT OVER, EXPERTS SAY

Dr. Peter Juni, director of the Ontario COVID-19 Science Table, told CTV News Channel on Wednesday that it seems too early to be sure it is safe to lift mask mandates.

Juni said he would “like to follow the data,” but can’t as testing requirements have changed and it’s still too early to see the impact of the province’s previous reopening step, which happened March 1 and saw the end of vaccine mandates, on COVID-19 cases and hospitalizations.

In order to truly see if the end of vaccine mandates impacted case levels in Ontario, we would need to wait around two weeks after March 1, Juni said. The same goes for other provinces and is one of the reasons why some experts feel the removal of mask mandates is premature.

Edmonton-based ICU physician Dr. Darren Markland said he understands needing to move forward to the next phase of the pandemic, but called Alberta’s reopening and removal of mask mandates a “very big shift in mentality” that not everyone may be ready for.

Markland told CTV News Edmonton the science doesn’t suggest that the pandemic is over, and that another variant will likely arise. Because of this, he said keeping some health measures in place would help provinces be better prepared for future waves.

The Alberta government is also pushing ahead to make amendments to the Municipal Government Act to prevent cities from imposing their own public health measures such as mask mandates, and experts say this politicization of the issue could further divide Canadians over masking in the future.

Dr. Gerald Evans, chair of Queen’s University’s infectious diseases division in Kingston, Ont., told CTVNews.ca it will be difficult to re-implement masks and other public health measures should cases spike, given that officials say they’re removing them to “return to normal.”

“If the numbers really start shooting up and people are in the hospital again and people are dying again, it’s going to be really hard to reverse that narrative. Because at that point, it’s a story and it’s not informed anymore by whatever scientific data is in there,” Evans said in a telephone interview Thursday.

Evans says public aggression around the implementation of COVID-19 health measures reached a boiling point earlier this year with the so-called Freedom Convoy demonstrations in Ottawa and elsewhere, during which residents reported being harassed by some protesters for wearing masks.

“It’s really kind of funny that those truck convoy people were saying, ‘You have to respect my right not to wear a mask’… And yet we saw them actually not respecting the decision of people who wanted to wear masks,” he said.

Evans said there may be an increase in harassment towards those who choose to continue masking, however, he said he hopes this will be “such a small minority of the population” that incidents of harassment will be “few and far between.”

Given that COVID-19 mandates began easing across provinces shortly after the Freedom Convoy protests, Evan said he is concerned that those involved in the demonstrations will think they had a hand in changing the requirements for masks.

He added that if these groups of people believe they were right to take such action and believe they got the result they were looking for, they may take it upon themselves to publicly express those views and berate people they see continuing to wear masks.

Despite this, Evans urged those who choose to continue wearing a mask to “stick by it,” as there will likely be many others who choose to do so in certain public settings, such as grocery stores.

As well, Evans said he believes Canadians will defend one another’s interests should they encounter someone being harassed for wearing a mask.

“If you’re wearing a mask in public, you should feel reassured that you’re still doing a lot to protect yourself and protect those around you,” Evans said.

With files from CTV News staff